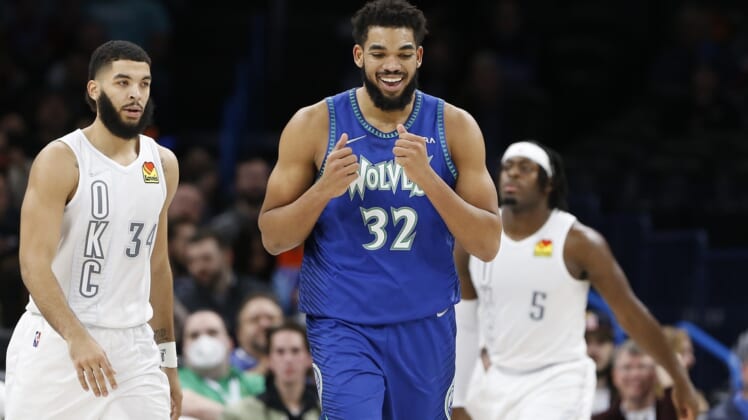 In what was the second game since Karl-Anthony Towns and D’Angelo Russell exited league health and safety protocol and rejoined Anthony Edwards in the starting lineup, the Minnesota Timberwolves offered a reminder of the potency of their burgeoning Big 3.

Towns, Russell and Edwards combined for 70 points on 27-for-39 shooting plus 15 rebounds and 24 assists in a 135-105 victory over the Oklahoma City Thunder Friday in the opener of a four-game road trip that continues Sunday against the Houston Rockets at Toyota Center.

Russell had 12 of those 24 assists as the Timberwolves recorded a season-high 39 assists on their 50 field goals. The Timberwolves’ offensive core took a staggered approach to dominance against the Thunder, with Edwards scoring 17 points on 6-of-6 shooting in the first quarter before Russell paired 15 points (on 6-of-6 shooting) with five assists in the second period.

Towns helped apply the knockout blow with 10 points and five boards in the third as Minnesota carried a 103-80 lead into the final period. Edwards, the No. 1 overall pick in the 2020 draft, provided the spark with five 3-pointers in the opening frame. His veteran teammates took over from there.

“What we love about the way Ant’s playing right now is everything is really quick, it’s decisive, and you can see the rhythm growing as he’s stepping into his shot,” Timberwolves coach Chris Finch said. “Then D-Lo took over from there and then KAT owned the third quarter for us.

The Rockets followed a spirited road win in Washington Wednesday with a lethargic showing from start to finish against a Dallas team missing Luka Doncic (ankle) and Kristaps Porzingis (health and safety protocol). Houston fell behind by double digits in the first quarter and never threatened in a 130-106 home loss Friday in which the Rockets trailed by as many as 31 points.

“Obviously it’s been an emotional week for us and just looking out there I saw guys holding their shorts and I saw guys tired,” Rockets coach Stephen Silas said. “I’m not going to put it all on fatigue; obviously we needed to play better. We need to use (Saturday) as a day to regroup and recover so we can have the requisite energy for the back-to-back coming up.”

Prior to facing the Philadelphia 76ers Monday in the second game of a back-to-back, the Rockets must prepare for the Timberwolves and their rampaging rim runs courtesy of the attacking Edwards and the pick-and-roll prowess of Russell and Towns. Against the Mavericks, the Rockets displayed a blueprint of what not to do in order to enjoy success.

“We have a team coming in here that’s going to play very similar to what we saw (against Dallas),” Silas said. “There is a lot of correction that needs to go on so we can play better.”