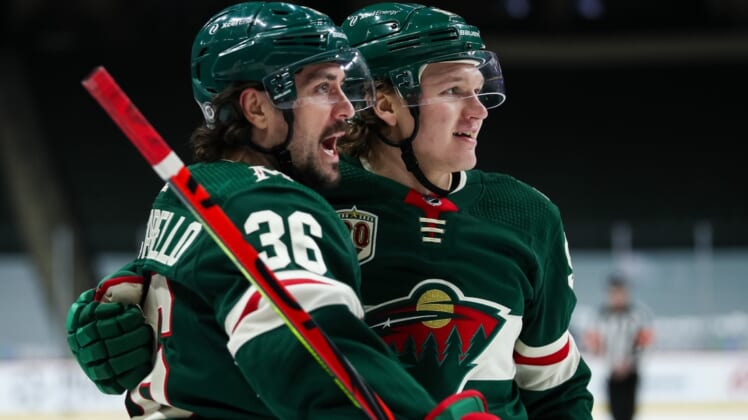 The Minnesota Wild left Denver two weeks ago after getting completely dominated by the Colorado Avalanche. In two games they were outscored 11-1 and outshot 86-46.

Those two losses could have lingered, but Minnesota quickly recovered. Since that trip to Colorado, the Wild are 5-1-1 and just swept a pair of road games from the Vegas Golden Knights. They take that momentum into two home games against the Avalanche, starting Monday night.

Minnesota has been stingy on defense in its five recent wins, allowing just six goals. It is a far cry from March 20 when Colorado scored six in a shutout win. After that game, coming on the heels of a 5-1 loss, the players were left soul-searching for answers.

“These two games we played we got a lesson on how to play hockey,” right wing Mats Zuccarello said after that loss. “They played real well and we didn’t really have an answer for them. They were better than us in every aspect of the game, and it’s hard but you have to be honest with yourself. These two games are not acceptable. It’s not like we didn’t work hard or anything. They were smarter than us.”

The season series between the team wraps up with games Monday and Wednesday. Colorado has won four of the six games, losing one in overtime. With the end of the regular season rapidly approaching, the teams are battling for playoff positioning. The Avalanche lead the West Division and the Wild are in third, six points behind.

The two games in St. Paul could either tighten the gap or expand it.

If Minnesota is going to gain ground, it won’t be easy. Colorado is 12-0-2 in its last 14 games, sweeping St. Louis on Friday and Saturday nights. Both wins were one-goal games, and Saturday night’s outcome wasn’t decided until defenseman Cale Makar’s goal with 41 seconds left.

Every line is producing for the Avalanche and the defensive corps is pitching in. Over the last 14 games, Colorado has outscored opponents 62-25 and has posted two shutouts. The Avalanche are the hottest team in the league and have justified the predictions that they have a good chance to win the Stanley Cup.

The end of the season will be a test, however. Colorado plays 14 of its last 19 games on the road, with four of those road games coming against the teams sitting in second and third place.

The Avalanche have been tested. Consider that they have won 10 consecutive games that have been decided by more two or more goals, but have won just four of the past eight one-goal results in the past month. Still, that they won the past two shows that they are even improving in that regard.

“We’re in a fight, a race to try and get home ice and put ourselves in the best possible position we can for the playoffs and our guys are taking it to heart,” coach Jared Bednar said after Saturday’s win. “They’re coming out every night with the right mindset and attitude and desire to win the hockey game. I expect that to continue down the stretch. “