Minnesota Wild look to return to action Wednesday vs. Coyotes 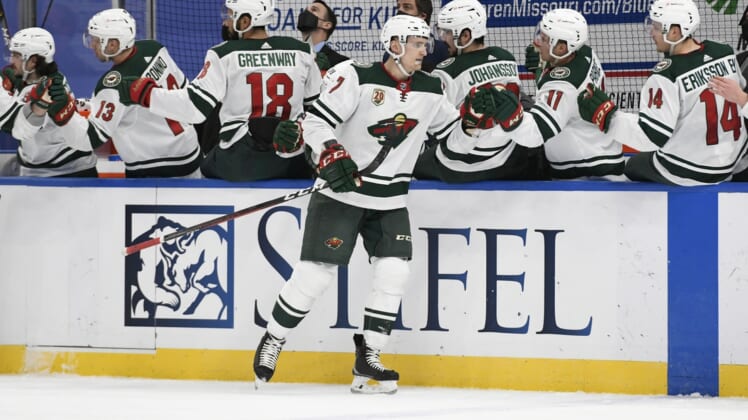 The Minnesota Wild hope to be back in action Wednesday night after their Monday home date this week was postponed as a precaution due to protests in the wake of the police shooting of Daunte Wright in nearby Brooklyn Center.

“There’s a lot going on right now,” Wild general manager Bill Guerin told the Star-Tribune. The team’s Monday home game against the St. Louis Blues has been rescheduled for May 12.

Wednesday, the Wild hope to avoid a season-high third consecutive defeat when they host the Arizona Coyotes, mired in a four-game slide, in Saint Paul, Minn.

Although Minnesota sits third in the West Division, the Wild are amid a 1-2-1 stretch after losing in St. Louis 9-1 on Friday and 3-2 in overtime on Saturday. Striving to rebound from Friday’s humiliation, the Wild painfully failed to hold a pair of one-goal leads Saturday.

“We know who we are. We forget sometimes, and we need to have an adjustment,” Wild coach Dean Evason said. “That’s how we play the game, and more often than not, we do that and we give ourselves a chance to have success.”

Read More: Minnesota Timberwolves to return to court vs. Nets on Tuesday

Minnesota has enjoyed plenty of success while winning four of five from Arizona this season, and outscoring the Coyotes 11-1 to win all three home meetings. Cam Talbot and Kaapo Kahkonen each have 12 wins this season and each has a home shutout against Arizona.

Arizona is one point behind St. Louis for the fourth and final playoff spot in the West, but has lost four straight games in regulation for the first time this season. The Coyotes fell behind 3-0 at Colorado on Monday before third-period goals by Michael Bunting and Johan Larsson made things interesting before the Avalanche prevailed 4-2.

Larsson has three goals and three assists in seven games this month.

Wednesday is the last game of a nine-game road stretch for the Coyotes, who are 3-5-0 on the trip while being outscored 31-24.

“We’re looking to get some traction here,” Coyotes coach Rick Tocchet said. “We need some good things to happen for our team. Playing and continuing to fight is the only way we’re going to get out of it.”

Minnesota rookie Kirill Kaprizov leads the club with 34 points but has failed to register any in three of the last four contests. He has seven points in five games against Arizona this season, including his first NHL hat trick during a 4-0 victory on March 12.

Out since March 12 with a lower-body issue, key forward Marcus Foligno could return to the Minnesota lineup Wednesday.