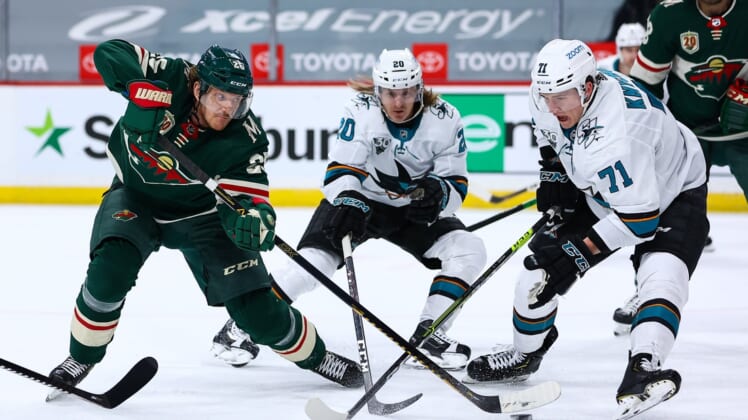 Mats Zuccarello had a goal and an assist as the Minnesota Wild defeated visiting San Jose 5-2 on Saturday in Minneapolis, spoiling the record-equaling night of the Sharks’ Patrick Marleau.

Joel Erikkson Ek, Zach Parise, Kirill Kaprisov and Nico Sturm also scored for the Wild, who won their third consecutive game and improved to 4-1-1 in their past six. Goaltender Kaapo Kahkonen made 26 saves.

Brent Burns and Joel Kellman scored and Martin Jones stopped 19 of 24 shots before being pulled after the second period for the Sharks, who have lost five consecutive games and six out of seven to see their postseason hopes dwindle.

Marleau, the 41-year-old center, played in his 1,767th career NHL game, tying the league record held by Gordie Howe. Marleau received an ovation from the hockey-mad Minnesota crowd during a stoppage in play eight minutes into the first period.

Burns gave the Sharks a 1-0 lead at 12:02 of the first period on a wrist shot through traffic from the right point.

The Wild overcame the early deficit with three goals in a span of 1:12.

Zuccarello tied the score with a power-play goal at 14:35 of the first after nearly fanning on his shot from the bottom of the right faceoff circle. The puck slowly slid across the crease and off Burns’ skate and into the net.

The second goal, at 15:11, was also a bit of a fluke. Jones stopped Jordan Greenway’s shot, but the puck corralled off Erikkson Ek’s left shoulder and into the net.

Parise made it 3-0 at 15:47, between Jones between the leg pads on a wrister from the left faceoff circle on a two-on-one break.

Kaprizov added to the lead at 1:14 of the second with a one-timer from between the faceoff circles and Sturm scored on a wraparound at 19:11 to give Minnesota a 5-1 lead heading into the final period.

Kellman capped the scoring at 17:45 of the third.