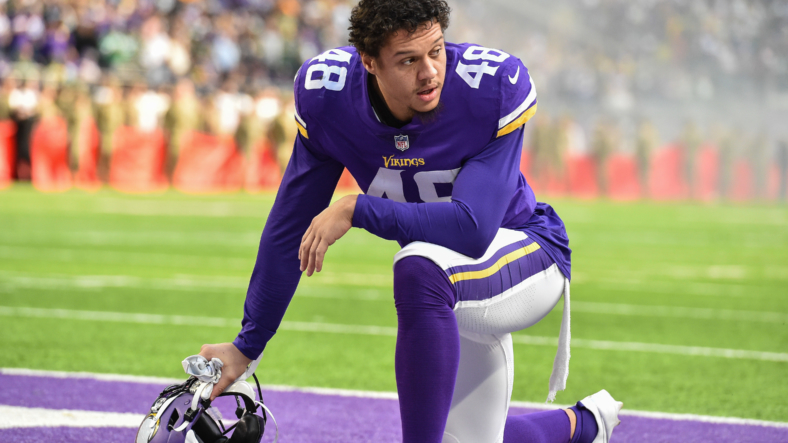 The Minnesota Vikings are set to play their preseason finale on Saturday night, taking on the Denver Broncos at 8 PM CT on NFL Network. Kwesi Adofo-Mensah and coach Kevin O’Connell will have a lot of tough decisions to make shortly after the game, with the roster cutdown deadline set for Tuesday at 3 PM.

Right now, the Vikings have 80 players on their roster, but they need to get down to 53 players. An additional 16 practice squad spots will be available once everyone has passed through waivers.

In other words, there are a lot of roster spots up for grabs with just one game left to play. Let’s look at some of the ongoing position battles to watch during Saturday night’s game.

After last week’s trade, Nick Mullens is penciled in as the short-term No. 2 quarterback. The question is whether the Vikings choose to keep two or three QBs on the roster. Sean Mannion, 30, should have a leg up on knowing how to operate the offense after having previous experience with the Los Angeles Rams, but he is what he is. There’s no sudden growth coming into his eighth NFL season. Yet, he is certainly better than Kellen Mond at this point.

Mond needs a lot of refinement. There’s a strong platform of talent, and he was plenty productive in college with nearly 10,000 passing yards, but defenses are much simpler and slower in the SEC than they are in the NFC North. At 23, Mond’s ability to process information is far behind that of Mannion’s. Maybe that gap can drastically decrease under the tutelage of O’Connell and Co.

The coaching staff knows more about the situation and what goes on inside the QB room than we do. By all appearances, Mannion is great during the season, helping identify coverages and pick out defensive tendencies, and maybe that earns him a spot. But there’s no reason he can’t simply be on the practice squad instead, as he’s unlikely to draw much if any free agent interest.

Mond could be a different story. There were links to the Houston Texans having pre-draft interest before selecting Davis Mills. Maybe they’d hop all over Mond if he were available on waivers. Maybe the Vikings do really appreciate Mond’s athletic ability and unique skill sets that Kirk Cousins doesn’t have by being able to make something out of nothing.

Yet, it’s also possible the team truly wants to see one final game from each of Mannion and Mond to determine who gets the final QB spot on the depth chart. If that’s the case, get your popcorn ready.

Mond was great in Week 1 and not so great in Week 2. How does he respond in Week 3? Mannion feels he’s had a great camp, but he has to see the writing on the wall. Does he leave it all on the field on Saturday under the lights?

The Vikings have one of the best wide receiver groups in the NFL. While they may not be well-known worldwide, KJ Osborn and Ihmir Smith-Marsette are written in ink, behind Justin Jefferson and Adam Thielen on the depth chart. After that, it’s a toss-up. Teams typically keep anywhere from five to seven receivers on the final roster, with the final one or two spots reserved for special teams roles, whether it’s as a returner or gunner on kickoff teams.

Vying for the fifth or sixth receiver roles are a few familiar names in Bisi Johnson, who’s healthy after tearing his ACL in camp a year ago. He’s likely the favorite. Yet, if it’s a special teams role the team values, Dan Chisena and his 4.32 speed have proven to be effective running down punts in the past two seasons.

Trishton Jackson is a holdover from the previous regime, but he also has ties to the O’Connell with the Rams after landing in LA as an undrafted free agent. He only has three catches for 43 yards this preseason, but that could be due to the ineffective passing attack and lack of opportunities.

Jalen Nailor is their sixth-round rookie out of Michigan State, and he’s flashed in camp, but he too has suffered from a lack of plays, catching four passes for 33 yards in two games this season. It’s always a risk trying to slip recent draft picks to the practice squad, so he may have a better chance of sticking on the initial roster over Jackson and Chisena, but it could come down to their performance on Saturday.

Related: Justin Jefferson: ‘I’ll be the best receiver in the NFL in 2023’

Filling out the trenches (OL)

Always a popular topic when talking about the Vikes. Their offensive line has many new names in total, and we still don’t know for sure who their starting right guard will be in Week 1. Rookie Ed Ingram looks like the one, but Jesse Davis certainly has more experience with 72 career starts. We don’t know whether we’ll a few starting offensive linemen on Saturday, but there are a few backups who we should have an eye on no matter what.

Chris Reed oddly hasn’t played a snap this preseason, but his spot should be secure. Instead, we’re curious to see the progress of Wyatt Davis.

The 2021 third-round pick actually held up in pass protection in Week 2, getting a 72.1 pass block grade per Pro Football Focus, yet it was just in 12 snaps. With pass protection being a weakness along the offensive interior in the past, throwing the towel in on the 23-year-old would not be ideal. Perhaps it was a fluke, as he was horrible in Week 1 (40.8 grade), but that’s why Week 3 could be important for his future.

Last year’s starter at right guard, Oli Udoh is on the fringe of the roster, battling with the likes of Davis, Blake Brandel, sixth-round rookie Vederian Lowe, and Kyle Hinton. The Vikings may keep anywhere from eight to ten offensive linemen. Aside from the five starters, that may only leave two spots aside from the three veteran newcomers in Reed, Davis, and Austin Schlottmann. There’s a lot of competition going on in the trenches in the land of 10,000 lakes.

Much like the offensive line, the backup middle linebacker spot has a lot of familiar faces competing for what could be the final spot on the roster. Eric Kendricks, Jordan Hicks, and Brian Asamoah are the three locks, but the Vikings are now running a 3-4 defense under Ed Donatell, which means they are likely to keep at least four middle linebackers.

Who’s the fourth? Troy Dye, Blake Lynch, and Chazz Surratt all have a case to make the roster once again in 2022. Surratt was the 78th pick in the 2021 NFL Draft, and it’s not like he’s been horrible in limited action. There’s no need to give up on him now, yet if the staff prefers to move on, he’s a strong trade candidate.

Dye and Lynch both made the team as rookies in 2020, though Lynch was undrafted and Dye was a fourth-round pick. The previous coaching staff didn’t care about when players were drafted, rightfully so, and Lynch seemed to surpass Dye last season by starting six games when injuries struck. Is Lynch still ahead of Dye in 2022, or are they both on the outside looking in?

We can’t forget about Luiji Vilain. The Vikings quickly struck an undrafted free agent deal with Vilain, giving him a 20K signing bonus to go with a three-year contract. He’s likely more of an outside backer, but he may be able to snag a spot from one of these aforementioned middle linebackers. Even if they may not be projected for big roles this season, the Vikings have a lot of competitors vying for the final spot in the linebacker room.

The Vikings surprisingly let 2020 fifth-round pick Harrison Hand go this week. He quickly signed with the New York Giants, despite the team having an interest in bringing Hand back at a later time. That may still happen after roster cutdowns, but for now the Vikes will get a look at a few others competing for the sixth cornerback spot, if they keep that many.

Unless Andrew Booth’s injury is more serious than we think, the team has potentially five corners locked in. That leaves Kris Boyd, Parry Nickerson, Tye Smith, and Nate Hairston all trying to essentially compete to become a core special teamer. The last three have been relatively interchangeable on the roster, yet Hairston has a connection to defensive coordinator Ed Donatell from their Denver days. Boyd has 41 games of experience and loves being a part of the Minnesota Vikings. He’s all about the team. Still just 25, it’s possible he takes a step forward under new direction.

After seeing so many cornerbacks come and go over the past few seasons, the Vikings need to make sure their depth is strong, even if that means keeping six on the depth chart. Let’s see who wins the battle on Saturday.