5 Minnesota Vikings poised to disappoint in 2022 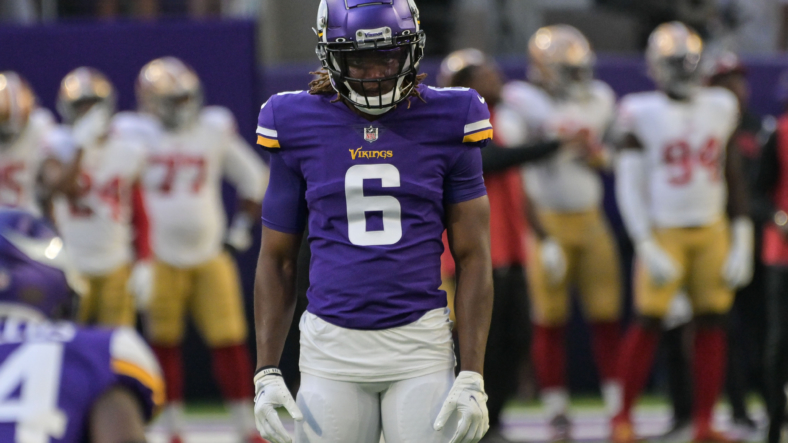 The Minnesota Vikings are closing in on the start of their 2022 football season, kicking off against their NFC North rivals right away in Week 1. Their schedule doesn’t get easier from there, playing seven of their 17 games against teams who made the playoffs a season ago. While expectations are high as the voyage begins anew under fresh leadership, as Vikings fans know all too well, there’s always a chance of disappointment.

Aside from the coaching staff, which is unproven, it’s the players who will bear the brunt of the blame should the season go awry.

Previously we looked at three players poised for a breakout year for some positivity, and we also glanced at four of the biggest concerns for the Vikings leading into the season. Now we’re lowering expectations for a few individual Vikings who may not live up to expectations in 2022.

Related: Purple Path Forward: How the Minnesota Vikings can beat the Packers in Week 1

Jalen Reagor fails to live up to trade cost

In a surprising move that came as general manager Kwesi Adofo-Mensah was setting the final 53-man roster, the Vikings traded a 2023 seventh and a conditional 2024 fifth-round pick that could become a fourth-round pick if Jalen Reagor hits specific unknown achievements in 2022. For Reagor to actually live up to that fourth or fifth-round expectation, he’ll have to become a standout punt returner, as that’s his initial role with the team.

At best, Reagor is the fourth receiver in the offense, behind K.J. Osborn. Unless Justin Jefferson, Adam Thielen, or Osborn get hurt, the majority of Reagor’s play time will be exclusive to special teams return teams. Yet, there is a glimmer of hope for Reagor to get more involved on offense, as Kevin O’Connell is expected to run more four wide receiver sets than we’ve ever seen in the Mike Zimmer era. That’s where Reagor could luck into a few targets with Kirk Cousins spreading the ball around the field.

But if anyone’s expecting Reagor to rival Justin Jefferson after being taken one slot higher than the LSU standout, don’t hold your breath. In fact, we’re not even sure he can become an above-average punt returner. What he does have, is a moderate amount of experience, at least more than Osborn, who has just 11 career returns.

Reagor had the third-most punt returns (31) in the NFL last season, but he finished ninth in yardage, 12th in yards per return (7.3), and his longest return ranked 11th. Basically, he’s only been average as a returner. Is that really worth a fourth or fifth-round pick? If he can reach the end zone as he did in his rookie year, maybe. If not, well, was it worth releasing Ihmir Smith-Marsette for? Time will tell.

Garrett Bradbury proves he is who we thought he was

Despite once being the 18th overall pick, few anticipate Garrett Bradbury to suddenly figure out how to play with a stronger point of attack and hold his base as he enters his fourth season in the NFL. Some offensive linemen do take a bit longer to develop, but his weaknesses, which seem to be physical in nature, don’t seem like something that can be fixed overnight.

Bradbury ranked dead last with a 43.7 passing grade among centers who played at least 500 snaps according to Pro Football Focus in 2021. In an offense that’s expected to pass more often than ever, this tradition of allowing Bradbury to play every snap no matter how bad he is in pass protection won’t last.

Right now defensive coordinator Ed Donatell seems ready to roll with Jonathan Bullard as the third starter on a defensive line featuring Dalvin Tomlinson and Harrison Phillips. It’s not exactly a star-studded group up front. The linebackers behind them will eat up tackles and sacks, but what about the unit’s potential? Why was Armon Watts swapped out for former second-round pick Ross Blacklock? Just to save $1.2 million in the difference between the two’s salaries? That seems petty.

The Vikings only gave up a sixth-round pick for Blacklock, while also getting a seventh-rounder back. It’s really a non-investment. But we’re more curious as to what the front office/coaching staff sees in the 24-year-old who’s entering his third season in the NFL.

Despite playing for one of the worst franchises in football in the Houston Texans, Blacklock hasn’t been able to crack the starting lineup, having been on the field to start in just three games out of his 19 appearances in the past two seasons. Can he suddenly break into starter status with the Vikings once he learns the system? Maybe. But is he that much better than T.Y. McGill would have been, who tallied 3.5 sacks in preseason play? Trading for Blacklock, though he’s six years younger, may have been unnecessary.

Typically when a player is selected in the first round of the NFL Draft, they quickly find themselves in the starting lineup. That doesn’t appear to be the case for Lewis Cine, the 32nd pick back in April.

Instead, Cine will begin his NFL career in the same way, penciled in as the backup to Camryn Bynum next to defensive captain Harrison Smith. Although the Vikings are under new leadership in 2022, it’s possible they try and take a similar approach with their young safety.

After playing in the SEC for the nation’s top defense in the Georgia Bulldogs, Cine may be more pro-ready than other younger defensive prospects we’ve seen make their Vikings debut in recent years. Yet, the fact that he hasn’t been able to convincingly take over the starting role from Bynum should be a bit concerning. After all, there’s a reason the top brass felt Cine was worth the pick.

Bynum may have played a few more snaps than Cine has, with 211, but 21% of a team’s defensive plays is a very small sample size. Still, Bynum impressed by allowing a passer rating of just 26.9% as a rookie. Basically, it could be a while before Cine’s name is written in ink next to Harry the Hitman.

The Vikings were able to retain Patrick Peterson on a one-year, $4 million contract this past offseason after an up-and-down year in Mike Zimmer’s defense. Clearly, the eight-time Pro Bowl cornerback wants to be a Viking. But he was far from the lockdown ballhawk we saw make three first-team All-Pro selections with the Arizona Cardinals.

Instead, Peterson allowed a catch on 37-of-64 (57.4%) targets in 2021, tied for 64th in the NFL among cornerbacks (50% snaps played minimum) according to Pro Football Focus. Typically a player with multiple interceptions, P2 only managed to snag one in his first season in Minnesota.

Could a new 3-4 scheme with an actual, effective pass rush lead to a much better performance from the experienced vet who’s a likely Hall of Famer? Sure, but at some point 32-year-old cornerbacks lose their agility. We’ll see how Peterson handles himself as he heads into his 12th season in the NFL.