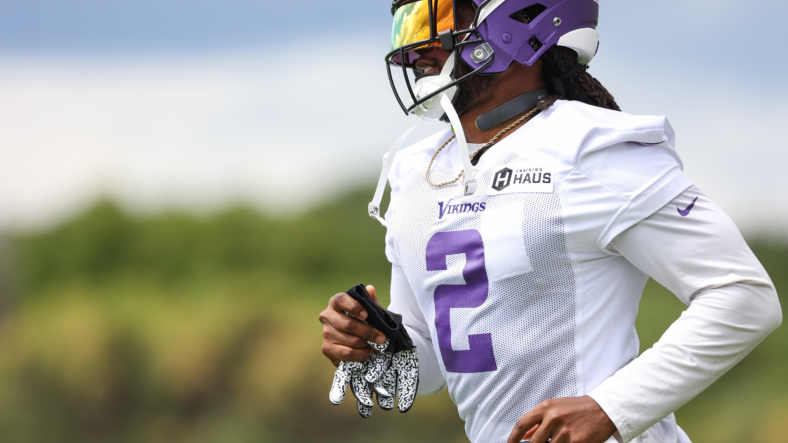 To the surprise of no one, the Minnesota Vikings are reportedly listening to trade requests for their backup running back Alexander Mattison, and have had at least 12 teams inquire. They’re not the ones actively looking to trade Dalvin Cook’s backup, but they are at least open to offers.

It’s not due to ineffectiveness, Mattison has averaged 4.2 yards per carry since entering the NFL as a third-round pick in 2019 and has done well when spelling Cook, either due to injury or when he needs a break.

The reason Mattison may be traded is because he’s entering the final year of his rookie contract, and likely wants a starting role elsewhere. Cook’s entrenched as the starter, and while Mattison has been solid, he’ll never raise his level of play to match Cook’s. Yet, that doesn’t mean he couldn’t at least compete to start elsewhere.

In an effort to not only add to their roster, whether now or in the future by adding draft capital, the Vikings may deal Mattison before the roster cutdown deadline on Tuesday at 4 PM ET. The move would not only help Mattison possibly receive a bigger role, but maybe even allow him to land with someone who values him more long-term.

All of this is to say, a Mattison trade wouldn’t be shocking, especially with the emergence of Kene Nwangwu and Ty Chandler. Even the general manager who first selected him would trade him, if he were still managing the Vikings. Though Rick Spielman is no longer making the decisions in the Twin Cities, we could see his replacement, Kwesi Adofo-Mensah act in a similar manner.

The Washington Commanders are suddenly in a unique pickle with less than two weeks to go before Week 1 kicks off. Their projected starting running back, Brian Robinson, was recently shot in an attempted robbery, and now he’s in recovery. His timetable to return is unknown, though he’s doing well.

Their starter for each of the past two seasons, Antonio Gibson, has had trouble hanging onto the ball, and it’s driving coach Ron Rivera up the wall. Gibson has fumbled seven times in 506 touches, or once every 72 touches. Mattison hasn’t received as many carries since he’s primarily been a backup, but his two fumbles in 385 touches sounds much better, with a fumble occurring once every 192 touches, on average.

Looking at career rushing averages, Gibson’s 4.3 yards per carry is nearly similar to Mattison’s 4.2 career average. If the Commanders are just tired of Gibson’s flaws, they may prefer a chance to buy low on Mattison. It likely wouldn’t require anything more than maybe a fifth-round pick, though the Vikings are reported to be seeking a third-or-fourth round pick in return.

To be honest, we stole this idea from Rick Spielman. He suggested the Philadelphia Eagles should be on the phone with the Vikings in an effort to pluck Mattison from their grasp. Spielman noted that Kareem Hunt may be available, but Mattison’s rookie contract is much more affordable than Hunt, who wants a pay raise and a new contract.

Trader Rick nailed it. That’s what made him an excellent GM. He always had a good feel for the league.

In this case, Mattison can help the Eagles in a number of ways. Miles Sanders is a fine RB1 option, but he’s not the biggest back, and when they get down near the goal line, having the sturdier Mattison could be a more efficient option.

Mattison’s already used to being in a committee situation, and he’s proven to be effective in that role. That wouldn’t change if he suddenly booked a ticket for Philly.

The final fit for Mattison is the New York Giants. Saquon Barkley appears primed to return to superstar status now that he’s had more time to overcome the ACL tear he suffered in 2020. Only, the Giants haven’t planned for disaster. What if Barkley does get hurt again as he navigates a 17-game season in the final year of his contract? The G-Men wouldn’t have much depth leftover, not only in the short term, but also if Barkley walks as a free agent at the end of the year.

The Giants currently have Matt Breida as their top backup, and he adds some much-needed speed to the field, but he’s no long-term solution. Neither are Antonio Williams or Gary Brightwell. If Barkley has to miss time once again, Big Blue is in big trouble.