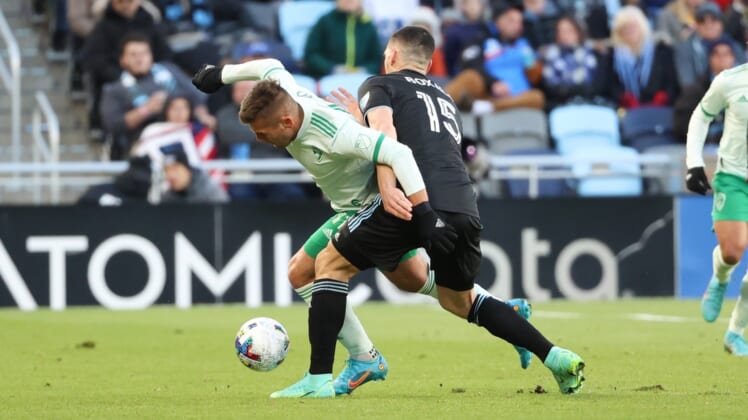 Robin Lod’s score in the 77th minute and Abu Danladi’s strike in the 79th gave Minnesota United FC the advantage it needed. The Loons held off the visiting Colorado Rapids the rest of the way, and won 3-1 Saturday night in St. Paul, Minn.

The victory for Minnesota (3-2-2, 11 points) snaps a two-game slide, and marks the most goals the Loons have scored in a single match all season.

Lod’s goal came after a combination on the right wing from Hassani Dotson and Emmanuel Reynoso. Reynoso gave the ball up to Dotson, who drew in two defenders as Reynoso drifted. Dotson fed it back to Reynoso and he delivered a low hard cross to Lod, who finished with force.

Moments later, Lod repaid the favor, notching an assist of his own. Just before entering the box, Lod dished the ball to his right to Danladi, who rifled a right-footed shot past a defender and Colorado’s diving goalkeeper.

Danladi’s score was his first of the season, and the 15th of his MLS career.

The Loons struck first in the 42nd minute when Bakaye Dibassy leapt up in traffic and headed in a cross from Reynoso. Minnesota had gotten off four shots up until that point and was aggressively attacking, controlling nearly 60% of possession in the first half. For Dibassy, the goal was his first of the season, and just the second of the defender’s MLS career across 43 games.

Shortly after Minnesota scored its first goal, Colorado evened things up in the third minute of stoppage before halftime. Diego Rubio netted the open-net equalizer after receiving a brilliant feed from Lucas Esteves. Rubio was initially ruled offside, but a video review reversed the decision and credited Rubio with his fourth goal of the season.

Colorado got off 15 shots and put eight of them on-target. Minnesota goalkeeper Dayne St. Clair had seven saves and the Loons’ defense had 25 clearances.
The physical match saw referees hand out six yellow cards and whistle for 16 fouls.