Minnesota United on a roll heading to face Dynamo 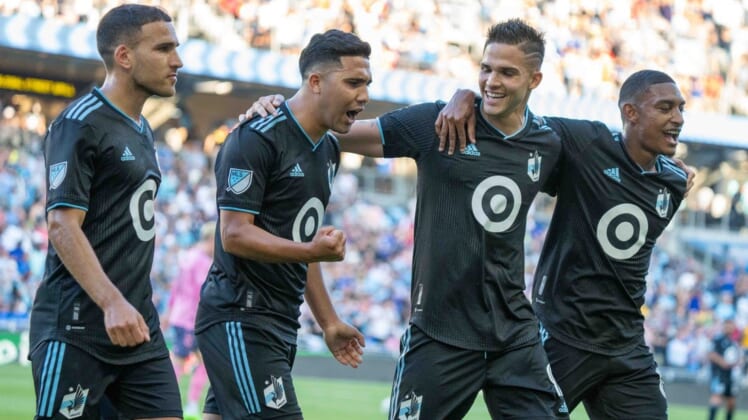 Minnesota United FC will aim to extend their unbeaten streak to six games when they hit the road to face the Houston Dynamo on Saturday night.

The Loons (9-8-4, 31 points) have not lost a league game in nearly a month, last falling June 25 on the road at Inter Miami. Since then, Minnesota has logged four wins and a tie and climbed to fourth in the Western Conference.

Most recently, the Loons topped English Premier League side Everton 4-0 in a friendly at home Wednesday. The celebration was spoiled a bit with midfielder Emanuel Reynoso exiting the game with an ankle injury.

Reynoso scored on a penalty kick against Everton, and he also has nine goals and five assists in 21 MLS starts for the Loons this season. He recently was named an MLS All-Star, yet it remains unclear if he’ll play on Saturday vs. Houston.

Minnesota coach Adrian Heath said he considered Reynoso’s status “questionable.” He will travel to Houston and test the ankle before the game.

“Obviously, when he does the substitution signal before he’s hit the ground really, you know it’s pretty bad,” Heath said. “He doesn’t feel as though it’s as bad. We don’t know (his full status) yet until the weekend.”

Houston (7-10-4, 25 points) is 11th in the West standings, but just six points separate the Dynamo and Minnesota. And the Dynamo are just two points below the playoff line in the tightly packed West.

A positive recent development is that the Dynamo’s offense finally has come alive with nine goals in the past six games, getting two wins and a tie in that stretch. Considering that Houston was shut out five times in May, it’s a noticeable improvement.

In that six-game stretch, Darwin Quintero and Thorleifur Ulfarsson have combined for five goals and three assists.

Most recently, the Dynamo won 2-1 on the road against the San Jose Earthquakes on Sunday.

“We got a great result in San Jose and that was a great performance overall. Now we are preparing for a good Minnesota team, a team that is very hot right now and playing well,” Houston coach Paulo Nagamura said. “The bottom line is that we have to be stronger at home, and that’s what we are working towards.”