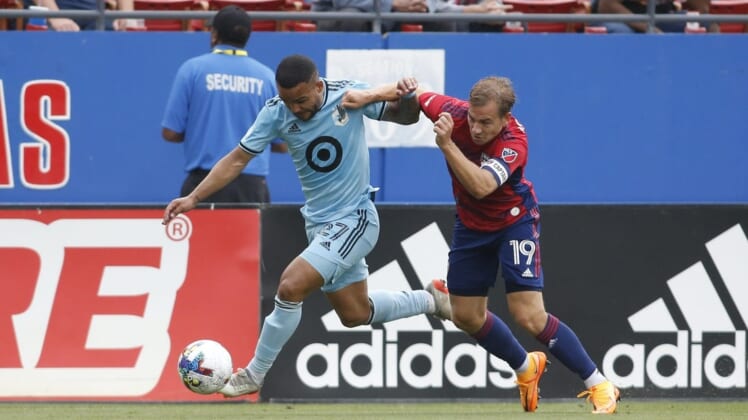 Robin Lod recorded his team-leading sixth goal in the first half and D.J. Taylor scored just before the hour mark, and Minnesota United FC held on to snap a four-match winless rut by handing FC Dallas its first home loss of the season with a 2-1 victory on Sunday in Frisco, Texas.

Four minutes after MUFC went up 2-0 on Taylor’s goal in the 55th minute, and just under the hour-mark, Dallas’ Paul Arriola scored in his fourth consecutive match on a right-footed laser into the high-right corner of the net. It ignited the home crowd, but despite FCD holding 67.6 percent of the possession, owning an 18-7 overall shot edge and pressing until the end, it could not equalize.

Dallas was the aggressor early and had the first official shot on goal — though easily saved by MUFC goalkeeper Dayne St. Clair. However, it was Minnesota, which posted two goals in its previous four MLS matches, that struck in 20 minutes. FCD keeper Maarten Paes (four saves) made the initial save on Emanuel Reynoso’s free kick, but the rebound was hot enough for Lod to pounce on and convert a fifth goal in his last six league games.

FCD also opened the second half poised to equalize. It appeared that would happen within the first three minutes, but Franco Jara missed wide of the goal.

Again, it was Minnesota that converted to go up 2-0, this time indirectly off a set piece.

The ball eventually found its way outside the top of the box to Taylor, who stuck on a half-volley through traffic on a shot to which Paes seemed late to react.

MUFC is 4-0-2 in its last six overall matches versus Dallas.