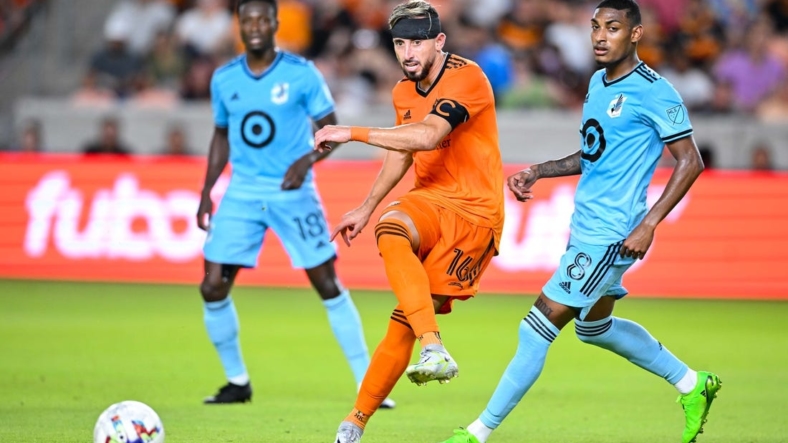 After a win over another Western Conference contender last weekend, Minnesota United FC will look to reinforce their postseason credentials when the struggling Houston Dynamo visit Saint Paul on Saturday.

Minnesota (12-9-5, 41 points) defeated second-place Austin FC 2-1 last Saturday to solidify its hold on fourth in the West and remain within a point of FC Dallas in third.

Emanuel Reynoso scored early from the penalty spot for his career-high 10th goal of the season, and Franco Fragapane’s sixth goal sealed all three points for the surging Loons.

Minnesota has lost just once in its last 10 games while closing in on a fourth consecutive playoff appearance. And the Loons know they’ll be expected to win comfortably at home against a Houston side that enters tied on points with Kansas City at the bottom of the West standings.

“We need to push the gas,” Minnesota right back DJ Taylor said. “We need to make a statement again about how we’re going to play at home … playing on the front foot, pressing, making teams get out of their comfort zone when they’re here at Allianz (Field).”

That’s been more pronounced on the road, where the Dynamo have posted a 3-9-1 record.

But any suggestion Houston already has one eye focused on 2023 may be undermined by their last away match. Sebastian Ferreira scored his team-leading ninth goal in the fifth minute of second-half stoppage time to salvage a 1-1 draw at Colorado on Aug. 20.

The Dynamo enter Saturday eight points back of the playoff line with seven games to play, but Nagamura isn’t giving up on the postseason just yet.

“There is a lot to play for until there’s a person that can show me proof that we are eliminated from the playoffs,” Nagamura insisted. “It’s difficult, it became a little bit harder, but I can guarantee you that with the group of players in the locker room, we will not give up.”