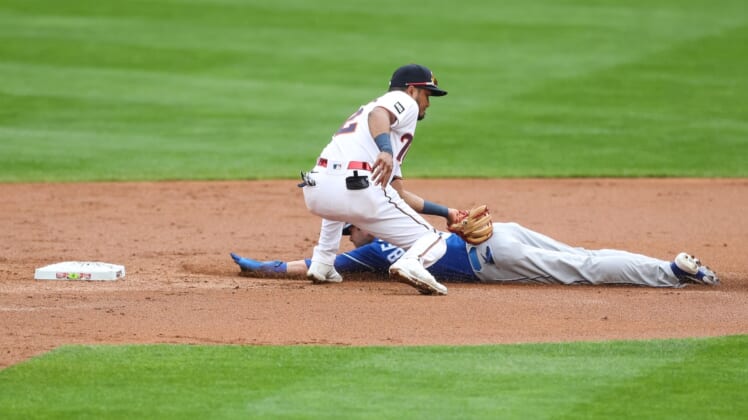 Mitch Garver’s three-run homer capped a seven-run third inning and the Minnesota Twins rolled to a 13-4 win against the Kansas City Royals on Sunday afternoon in Minneapolis.

The Twins were aided by a wild pitch, a hit batsman, two Royals errors and another misplay that was ruled a hit in the decisive inning.

Garver was one of five batters with multiple hits for the Twins, who had 14 on the day and took two out of three games to win their first home series this season.

Jose Berrios (3-2) battled through six innings for the win, giving up four runs on six hits. He only had one 1-2-3 inning, but he also struck out nine and issued just one walk.

Brad Keller (2-3) took the loss thanks to the one bad inning. Other than the third, he only faced one batter above the minimum. He allowed seven runs in 4 1/3 innings, but only two were earned. He struck out three and walked one.

The Twins got their first hit in the third on a two-run home run by Andrelton Simmons. He hit a 1-1 fastball 408 feet to left, scoring Jake Cave, who was hit by a pitch. Luis Arraez then singled. Back-to-back errors by Kansas City third baseman Hunter Dozier led to two more Twins runs before Garver found the seats in left.

Dozier began to make amends in the fourth with a three-run home run off Berrios. Carlos Santana led off the inning with a single. He was forced at second, but Andrew Benintendi singled with two outs before Dozier’s blast.

Whit Merrifield’s one-out RBI double in the fifth drew the Royals to within 7-4. But that’s as close as they would get, as Merrifield was stranded at second.

The Twins erased any drama with three more runs in the sixth. Four straight hits, including three extra-base hits, did the damage. Arraez had a triple, followed by doubles by Josh Donaldson and Byron Buxton to each drive in a run.

Alex Kirilloff capped the scoring in the eighth with a three-run home run, his fourth home run of the series and of his career.