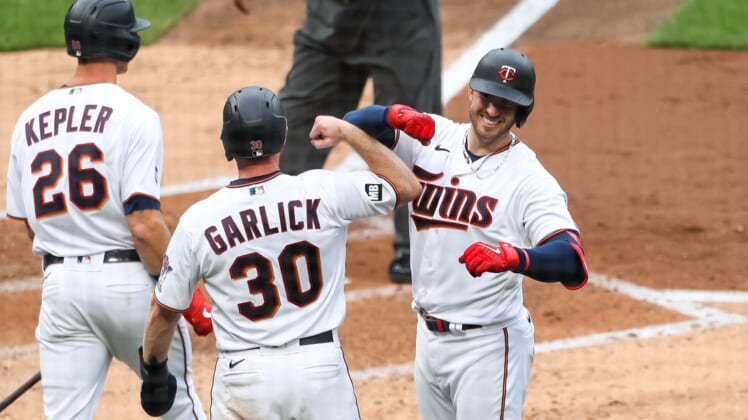 Mitch Garver, Byron Buxton and Luis Arraez homered as the Minnesota Twins pounded out 16 hits in a 10-2 victory over the Seattle Mariners in their home opener on Thursday afternoon in Minneapolis.

Buxton also doubled and singled, and Garver added a double while driving in three runs. Arraez contributed three RBIs, and Andrelton Simmons went 3-for-5 with two doubles and Kyle Garlick had two hits for Minnesota, which won its second consecutive game.

Jose Berrios, who pitched six no-hit innings in winning his season debut at Milwaukee, improved to 2-0 after allowing two runs on five hits and three walks over 5 2/3 innings. He struck out eight.

Berrios yielded his first hit of the season when Luis Torrens singled leading off the third inning.

The Mariners took a 1-0 lead in the third. Torrens singled and advanced to second on a two-out walk to Mitch Haniger. France followed with a broken-bat RBI single to center.

Minnesota sent nine batters to the plate in the bottom of the third, which began with back-to-back doubles by Jorge Polanco and Garlick. Nelson Cruz then walked and Buxton followed with a fielder’s choice. Garver smashed his second home run of the season 436 feet halfway up the batter’s eye in dead center to give the Twins a 4-1 lead.

Buxton led off the fifth with his fourth homer of the season to make it 5-1. Garver followed with a double off the wall in right-center and scored one out later on a single by Miguel Sano. Simmons then doubled Sano to third, and Arraez increased the lead to six with a sacrifice fly.

Marmolejos cut the Mariners’ deficit to 7-2 in the sixth with his first homer of the season, a 424-foot drive into the upper deck in right-center. Max Kepler made it 8-2 with an RBI single in the bottom half of the inning, and Arraez added a two-run homer to right in the seventh.

The Mariners lost for the third time in their past four games.