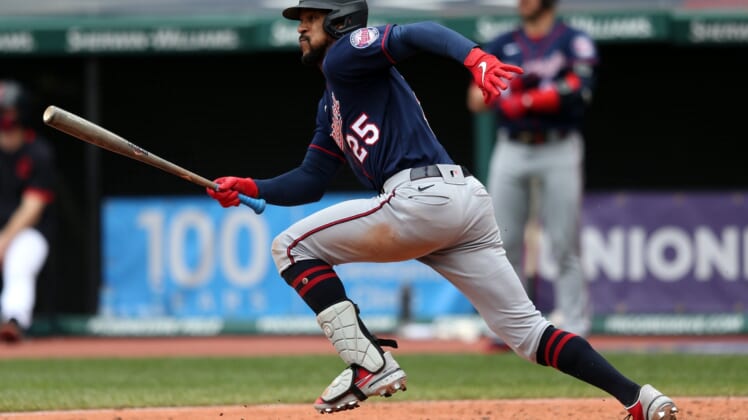 The Minnesota Twins got the bats going early Wednesday afternoon and scored seven runs in the first three innings to beat the host Cleveland Indians 10-2.

The Twins avoided a series sweep to the Indians in a big way, grabbing a 4-0 lead in the top of the first inning. Minnesota had lost eight of its previous nine games.

Minnesota hit a total of six home runs in the win with Mitch Garver hitting two of them. The franchise record of eight homers in one game was set in 1963 against the Washington Senators.

Cleveland starter Logan Allen (1-4) had not gotten out of the third inning in his previous two starts after giving up a combined nine runs to the Reds and Yankees.

Wednesday, he didn’t make it out of the second as he was pulled with one out after giving up a single to Alex Kirilloff and a double to Byron Buxton.

Trevor Stephan came out of the bullpen and walked Josh Donaldson before giving up a double off the right field wall to Nelson Cruz as Minnesota took a 6-0 lead.

Allen was charged with all six early runs and ended with an ugly line: 1 1/3 innings, five hits, six earned runs and one strikeout.

Buxton got things rolling, depositing Allen’s second pitch of the day into the right field seats.

Donaldson, batting second, went deep as well, hitting one to the left field bleachers at Progressive Field for a 2-0 lead.

After Cruz walked, Jorge Polanco hit one out to left to give Minnesota a 4-0 lead before Allen recorded his first out.

Buxton ended with the first five-hit game of his career, going 5-for-5 with a homer, two doubles, two runs scored and a stolen base. Cruz and Garver also had multiple hits for the Twins.

Cleveland got on the board when Amed Rosario led off the bottom of the second with a home run to right, but Willians Astudillo got that back with a shot to left leading off the third.

Rosario was the highlight for the Indians, going 2-for-3 with both runs scored.