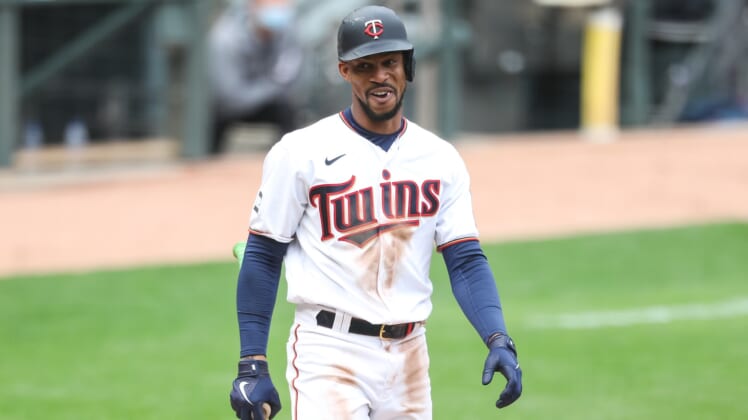 It might come as great news to Minnesota Twins fans that Byron Buxton is officially tapping into his anomalous skill set that made him such an indispensable prospect over five years ago.

Because of his unprecedented combination of speed and power, Buxton was unanimously considered the best prospect in baseball by both MLB.com and Baseball America in 2013.

Since his arrival to the big leagues in 2015, Buxton has provided fans with small glimpses of his latent five-tool potential by covering ridiculous ground in center field, exhibiting elite speed on the basepaths, and hitting an occasional dinger at the plate.

Early on in his career, the two main factors that inhibited Buxton from putting it all together were injuries and plate discipline. But in his age-27 season, it appears that Buxton is finally ready to show the league why he was regarded as one of MLB’s most electrifying talents destined for superstardom at one point.

Through 32 plate appearances in 2021, the former gold glove winner is slashing .432/.479/.977 with 11 RBI and six homers. His refined approach at the plate is producing much more quality contact as his expected weighted on-base average (xwOBA) is way up, and his strikeout rate is down about seven percentage points lower than his number from his previous six seasons.

In a condensed 60-game season in 2020, Buxton drew only two walks for the entire year. But this season, he’s drawn as many in only nine games played.

Byron Buxton is just getting started

What’s so terrifying about Buxton’s offensive tear is that the Twins haven’t even played enough games for him to put his other dynamic tools on display yet.

On Wednesday, though, he came through in a clutch situation. Buxton crushed a two-run homer in the 10th inning of Minnesota’s wild 13-12, loss to Oakland, as the A’s went on to score three in the bottom half of the frame to pull off the improbable win:

Nevertheless, the point of Buxton’s shot over the left-field wall wasn’t lost on anyone watching, eagerly anticipating a real sign of the former prodigy’s arrival.

That homer prompted MLB Network’s Jon Heyman to tweet the following, which hints that Buxton’s hot start could indeed be for real and a sign of what’s to come:

Defensively, too, Buxton is simply a wizard. His acrobatic diving catches in center field have won him a Platinum and Gold Glove Award along with a Wilson Defensive Player of the Year Award in 2017.

It’s a given that his athleticism and range will keep him atop the list of most defensive outfielders.

Opposing pitchers and catchers still have to worry about the threat of him on the basepaths. The explosive center fielder, who has already broken his club’s franchise record for consecutive stolen bases in 2019, will wreak havoc this year and easily steal between 30 and 40 bags.

Combine that with his pop at the plate, fans can expect 30-30 seasons out of Buxton for years to come; Given his skill set, a 40-40 season is not beyond the realm of possibility either, barring injury of course.

We’re talking about a unique skill set in Buxton that could produce numbers similar to Matt Kemp’s in 2011, a year in which the former Dodgers star hit .324 with 39 homers and 40 stolen bags, falling just short of the coveted 40-40.

Indeed, Matt Kemp came into his own at age 26, making his first All Star Game appearance and nearly winning the National League’s Most Valuable Player Award in 2011. Buxton is having his coming-out party at age 27, just a year older than when Kemp erupted.

While it’s still very early, the Twins star is reminding all of us why his ceiling was so high coming out of the minor leagues. Having the best start of his entire major league career, Buxton is showing signs of the MVP caliber player and perennial All Star that he was projected to be at his zenith.

Whether a fan of the Bomba Squad or not, the emergence of Buxton makes the entire league much more captivating.