In the 2020 NBA Draft, the New York Knicks selected Leandro Bolmaro 23rd overall out of Argentina. On draft night, his rights were later traded to the Minnesota Timberwolves in the same deal that brought in Ricky Rubio and Jaden McDaniels.

After an extra season developing overseas playing for FC Barcelona, Bolmaro will now take his talents to the NBA. The terms of the deal were not disclosed.

While it doesn’t compare to Ricky Rubio, Leandro Bolmaro has the gift of court vision. In 2020, Bolmaro displayed his ability to ooh the crowd making flashy passes, winning the Spanish league’s Most Spectacular Player award (given to the league’s flashiest player, not the best) in the process.

A willing passer who’s not afraid to attack the hoop, Bolmaro helps put pressure on defenses. Working on expanding his shooting range and consistency from 3-point land, Bolmaro also has above-average athleticism that helps him get to the rim. His quickness and lengthy frame (6-foot-8 wingspan) make Bolmaro a pest in passing lanes and a suffocating on-ball defender.

Wolves coaching staff already has a connection to Bolmaro

Not only did Leandro Bolmaro play in EuroLeague and the highest level of Spanish competition, but he also played on the Argentinian Olympic Men’s Basketball squad competing in the 2020 Tokyo Olympics. Bolmaro’s time with the Argentina national team gave fellow Argentinian and Timberwolves’ assistant coach Pablo Prigioni a chance to work and build chemistry with Minnesota’s newest member of the pack.

While Bolmaro only saw 11.7 minutes per game in Tokyo, it gave Prigioni some inside intel to bring back to the Timberwolves. The additional hands-on experience could go a long way toward speeding up Bolmaro’s development process. Now, Bolmaro can take the constructive criticism and apply it toward the remainder of his fall workouts as he prepares for his first NBA season.

For every Luka Doncic, there are about ten players like Marko Jaric. But sometimes, there’s a Nikola Pekovic to be found. The Timberwolves hope Bolmaro can come closer to Doncic or Pekovic rather than suffer the wrath of Kahn as Jaric did.

While Bolmaro is a first-round pick and just 20-years old, he’s not coming to the Timberwolves with a massive amount of hype or fanfare. Or at least not in the way Ricky Rubio did as a top-ten pick. Drafted in the latter portion of the opening round, Bolmaro should be seen as more of a project than a sure thing.

In the case of the Timberwolves, who already have strong depth at the shooting guard position, Bolmaro arrives with low expectations. After making the trade for Patrick Beverley, the backup point guard is shored up as well. Behind Pat Bev, there’s still Jordan McLaughlin and two-way standout McKinley Wright. While Bolmaro won’t be stealing any minutes from D’Angelo Russell or Beverley, it’s possible he could compete to be the team’s third ball-handler at times. 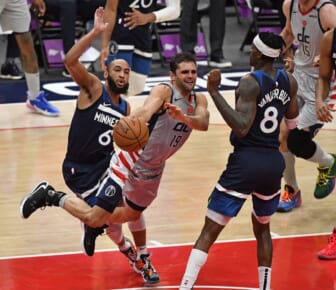 Bolmaro likely won’t see more than 15-20 minutes per game in his first NBA season. If Bolmaro is handy enough to play some point guard and good enough defensively to play small forward, he could have a quicker path to getting on the floor.

Anthony Edwards, Malik Beasley, Josh Okogie, and Jaylen Nowell are all ahead of Bolmaro on the depth chart on the wing. While the Timberwolves are rich at shooting guard, they don’t really have a defined small forward rotation. Jaden McDaniels and Taurean Prince are the leading candidates to play forward. Bolmaro could be competing with Jake Layman for a spot in the rotation.

With Bolmaro, how quickly he adjusts to the speed and style of NBA play may ultimately determine his immediate level of success. We’ll worry more about those Manu Ginobili comparisons later. For now, reaching the NBA is an incredible feat in itself.