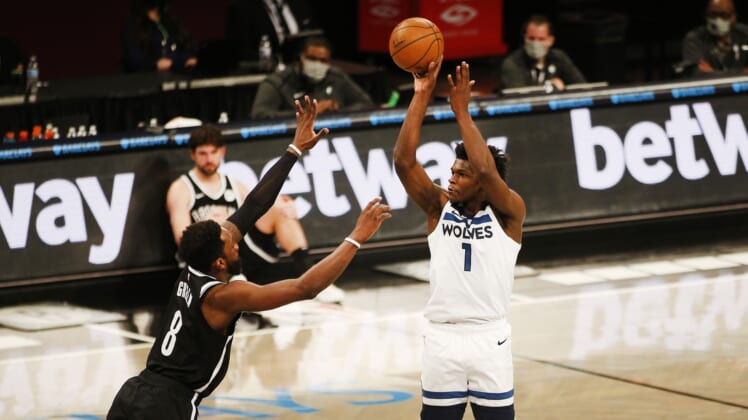 The Minnesota Timberwolves will seek their first two-game winning streak since opening the season with consecutive victories when they visit the Memphis Grizzlies on Friday.

Minnesota, sitting in last place in the Western Conference, scored a 102-101 defeat of the New York Knicks on Wednesday behind 24 points from rookie Anthony Edwards, and an 18-point, 17-rebound double-double from Karl-Anthony Towns.

Edwards comes into Memphis having scored at least 23 points in four of the Timberwolves’ past five games. He also scored a career-high 42 points against Phoenix on March 18.

“His confidence is ridiculous,” Malik Beasley said in his postgame press conference Wednesday.

Beasley’s 3-pointer off Edwards’ assist with 37.8 seconds remaining on Wednesday proved to be the difference.

“I trust him more than anybody on the team to get the ball and hit a bucket for us or make the right play,” Beasley said.

With his scoring average up to 17.3 points per game, Edwards is making a push for the 2020-21 NBA Rookie of the Year — an award Memphis point guard Ja Morant claimed last season.

Morant is coming off a 36-point effort on Wednesday, but the Grizzlies fell to the Utah Jazz, 111-107.

The loss marked Memphis’ third in its past four games — all three defeats against the NBA-leading Jazz — and dropped the Grizzlies to one game below .500. They are two games behind San Antonio for eighth place in the Western Conference through competition Wednesday.

“We show some good signs some games,” Morant said Wednesday. “Some games, we play the majority of it, but playing a full 48 minutes of Grizzlies basketball” is crucial to Memphis making a playoff push.

Memphis played Wednesday without Grayson Allen (hip), Brandon Clarke (personal reasons) and Justise Winslow (thigh). Jaren Jackson Jr. has yet to play but is on pace to return to the lineup by late April, according to Memphis general manager Zach Kleiman.

Minnesota has faced its own injury issues. Towns missed almost a month of competition from mid-January into February and D’Angelo Russell has been out since Feb. 8 with a knee injury that required arthroscopic surgery.

Edwards has played in all 48 games for Minnesota, while veteran point guard Ricky Rubio and reserve post player Naz Reid have suited up in 46.

While Russell works toward a return, the Timberwolves are without Josh Okogie due to COVID-19 protocols.

Minnesota’s lack of roster continuity — and the extended absences of former All-Stars Towns and Russell — contribute to the Timberwolves’ offensive inconsistency. They come into Memphis No. 28 in the NBA in field-goal shooting at 43.9 percent.

The Timberwolves’ shooting woes compound a defensive per-game yield of 116.8 points per game, third-to-last in the NBA through Wednesday’s game. Memphis is averaging 111.6 points per game, 20th-best in the league.