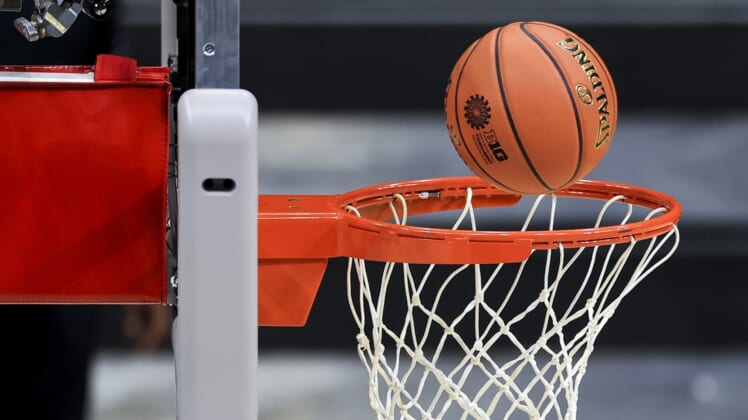 Mar 10, 2021; Indianapolis, Indiana, USA; A view of the official Big Ten Conference Tournament logo on the Spalding game ball during the game between the Minnesota Golden Gophers and the Northwestern Wildcats in the second half at Lucas Oil Stadium. Mandatory Credit: Aaron Doster-USA TODAY Sports

A native of Minneapolis, Johnson was on Pitino’s staff at Minnesota for five seasons from 2013-2018, before spending the past three years at Xavier under Travis Steele.

“The University of Minnesota is such a special place and has impacted me in immeasurable ways on and off the court,” Johnson said in a news release. “I want to thank President Joan Gabel, (athletic director) Mark Coyle, (deputy athletic director) Julie Manning and everyone involved in the search process for believing in me and trusting me to lead this historic program. I am ready to get to work.”

Johnson served as an assistant coach at four different Division I programs leading to his significant stints at Minnesota and Xavier.

Coyle called Johnson “a proven coach who is ready to lead his own program. He has earned this opportunity and is a tremendous teacher, recruiter and relationship builder.”

Johnson played under Dan Monson at Minnesota in 2002-2004, after transferring from Northwestern. He has local times as a two-time all-state prep player at DeLaSalle High School, which he led to a pair of state championships.

Since the Gophers program was shaken by an academic fraud scandal in 1999, the team has largely struggled, and has topped the .500 mark in Big Ten play just three times while cycling through high-profile coaches Monson, Tubby Smith, and Richard Pitino.

In announcing the departure of Pitino, who has since been hired by New Mexico, Coyle said, “I did not come to Minnesota to be .500… there is no reason why we can’t compete at a high level.”

Among the responses to the change was on Twitter from Clippers guard Amir Coffey, who Johnson recruited to Minnesota: “Gopher ball is in good hands!”