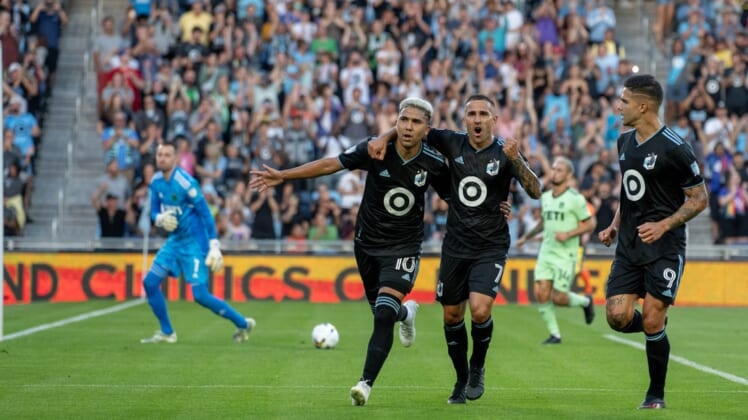 Franco Fragapane forced a turnover that allowed him to score his sixth goal of the season in the 62nd minute, and it ended up being the deciding tally that lifted Minnesota United over visiting Austin FC 2-1 on Saturday night.

Emanuel Reynoso added his team-leading 10th goal of the season from the penalty spot for Minnesota (12-9-5, 41 points), which maintained its position in the Western Conference at fourth place.

Minnesota has gone 7-1-2 in its last 10 games, losing only to Colorado in a match where Reynoso, midfielder Robin Lod and defender Michael Boxall all served one-game suspensions.

Sebastian Driussi also converted a penalty for his MLS-leading 18th goal for Austin (14-6-6, 48 points), which was attempting to be the first MLS team this season to record its ninth away victory.

Brad Stuver made four saves for the visitors, who remain in second in the West, nine points back of Supporters’ Shield leaders LAFC.

The top seven teams in each conference reach the playoffs, with the top finisher in each receiving a first-round bye.

Minnesota was a deserving winner on Saturday, tallying two more shots than Austin and leading 6-2 in shots on goal while offering persistent defensive pressure.

That approach is how it created Fragapane’s 62nd-minute winner.

Reynoso forced an ill-advised pass to defender Julio Cascante deep in his own end. Fragapane snuck behind Cascante, stripped him of the ball and then chipped it past the stranded goalkeeper to give the Loons the lead.

Austin thought it had a potential second penalty kick in second-half stoppage time for a Minnesota handball. But the appeals were irrelevant because of an offside call on a portion of the attack prior to the potential foul.

Minnesota took the lead earlier when Reynoso earned a penalty by inducing former United player Ethan Finlay into a rather obvious foul inside the penalty area.

Reynoso calmly finished the spot kick inside the right post to seal his first double-digit scoring season at any pro level in the 24th minute.

Austin was level in the same manner just before halftime when right back D.J. Taylor’s arm caught an Austin cross inside the box.

Referee Allen Chapman awarded a penalty for the handball, and Driussi finished off a cool, stutter-step finish to beat Dayne St. Clair.