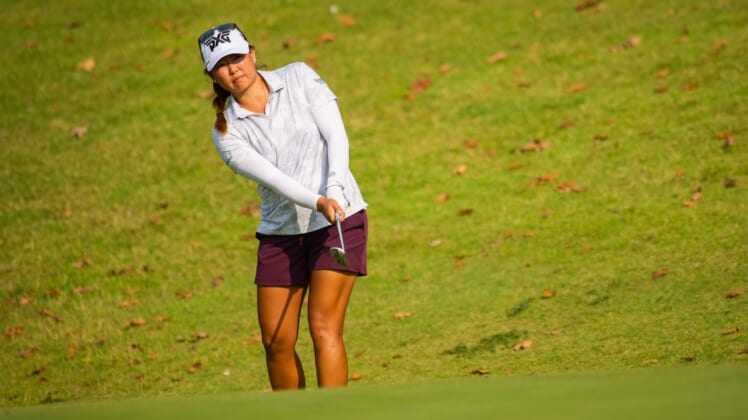 Harigae took a one-shot lead over Swedish amateur Ingrid Lindblad, whose 65 stood as the best score for much of the day.

Harigae birdied five of the first nine holes to post a 5-under 30 at the turn. A bogey at the par-5 10th didn’t derail her, as she recorded four more birdies in a five-hole stretch from Nos. 12-16.

Harigae, 32, is in a familiar position. She is still searching for her first LPGA victory but shared the 36-hole lead at a major last year, the Women’s British Open, before finishing tied for 13th.

“Just being appreciative of where I am, really taking in the moment, but at the same time, not trying to put so much precedent on how big the moment is,” Harigae said. “It’s another day on the golf course, another hole. You just have to execute the shots and putts out there.”

Before Harigae finished her round late in the afternoon, the day belonged to Lindblad, a 22-year-old amateur who played in a group with her idol and countrywoman, Annika Sorenstam. Lindblad started on the back nine and recovered from an opening bogey to shoot seven birdies, including three straight at Nos. 1-3.

“I’ve played her tournaments since 2014, and then when I saw that I’m playing her, I was like, in shock,” Lindblad said of Sorenstam. “I was like, this cannot be true.”

Lindblad — who earlier this year won the Southeastern Conference golf championship playing for LSU — set a U.S. Women’s Open record for the lowest round by an amateur.

Nordqvist heated up on the back nine, making five birdies for a 5-under 31 to get up to 4 under. She is in contention for her fourth major title after winning one in each of the past three decades, most recently last year’s Women’s British Open.

Thompson, the American star, is also threatening to make her mark. Her last victory came in 2019, and she earned her lone major title in 2014.

Thompson was among those who started on the back nine. After making the turn, she eagled the par-5 first hole to propel herself forward. After reaching the green in two, she sank a mid-range eagle putt.

“I think there’s a few gettable pins that I think they’ll put throughout the days, but just like I said, being patient and taking the pars when you can and being aggressive at the pins that you can be aggressive at,” Thompson said. “You can just (be nipped) in the bud if you go for a pin and you miss it by a few yards.”

Thompson placed third at last year’s U.S. Women’s Open, missing out on a playoff after shooting a 41 on the back nine on Sunday.

Sorenstam, 51, who is competing in the championship for the first time since 2008, opened with a 3-over 74. The 10-time major winner is considered the best player in LPGA history and qualified for this event by winning last year’s U.S. Senior Women’s Open.

Michelle Wie West, who said she will step away from competitive golf after the next two U.S. Women’s Opens, shot a 2-over 73.