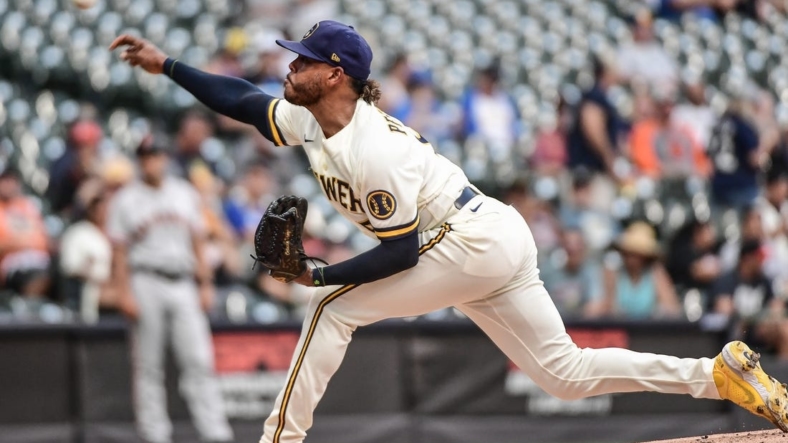 The Milwaukee bullpen covered seven solid innings after Freddy Peralta departed with a shoulder issue as the Brewers completed a doubleheader sweep with a 4-2 victory over the visiting San Francisco Giants on Thursday.

In the nightcap, Milwaukee led 4-0 before the Giants scored single runs in the seventh and eighth. Peter Strzelecki (2-1) got the win with two innings of scoreless relief. Taylor Rogers struck out the side in the ninth for his 31st save, and third in four chances since being acquired from San Diego in the Josh Hader trade.

Peralta, on the injured list for more than two months until early August with a shoulder problem, exited after issuing a leadoff walk in the third and throwing 44 pitches with what the Brewers announced as right shoulder fatigue.

Milwaukee scored three runs in the first on just one hit against opener Alex Young (0-1), who faced six batters in just his second start this season out of 19 appearances.

The Brewers made it 4-0 in the sixth when Luis Urias was hit by a pitch with two outs and rookie Garrett Mitchell followed with an RBI double off the wall in left.

San Francisco got a run in the seventh when Mike Yastrzemski tripled to open and came home when Luis Gonzalez reached on a fielders choice.

Joc Pederson pulled the Giants within 4-2 with his 22nd homer, a two-out solo shot in the eighth.

The Brewers won the opener 2-1 behind Corbin Burnes, who allowed one run on three hits over eight innings, striking out 14. Yelich and Renfroe accounted for Milwaukee’s runs with consecutive RBI doubles in the fourth inning.