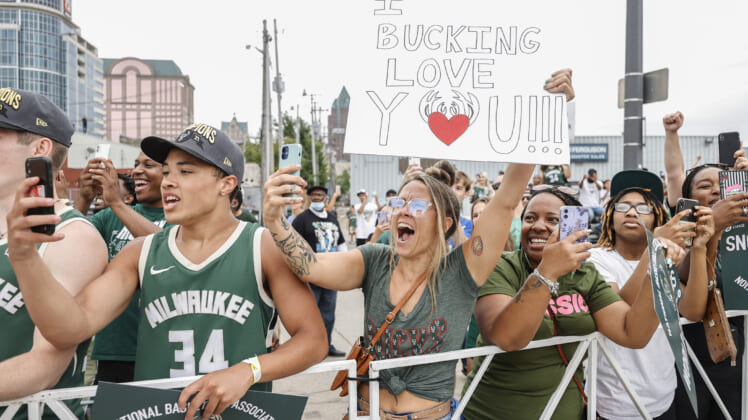 Following the Bucks 108-95 Game 6 loss to the Celtics yesterday night there was a dangerous outbreak of gun violence near the arena in downtown Milwaukee. Three individuals were shot in the Deer District plaza close to the Fiserv Forum in the first instance. Then another person was injured in a second shooting in the area, which was accompanied by a third occurrence that saw 17 people hurt.

The final shooting, which took place a mile from the arena, ended with 10 individuals being arrested and nine firearms being confiscated. One man was arrested for his involvement in the first incident, however, no arrests were made in connection with the second shooting episode on Friday night.

While as many as 21 people were injured during the various acts of gun violence, including a 16-year-old girl, none of the victims are believed to have life-threatening injuries.

Due to the shootings, the organization released a statement on Saturday condemning the violence and canceling a planned watch party for the team’s Game 7 matchup on Sunday afternoon.

“In order to allow law enforcement to devote needed resources to the continued investigation of last night’s events, we have decided to cancel tomorrow’s planned watch party on the plaza. Deer District businesses will remain open as usual. We continue to work with the Milwaukee Police Department and other public safety partners to provide a safe and welcoming environment for our fans. We plan to have further details soon,” the statement on Twitter read.

Homicides in Milwaukee are up 100% over the first few months of 2022 compared to the same time period in 2021. Last year saw record numbers of homicides in the city.

Game 7 of the Milwaukee Bucks vs Boston Celtics will air on ABC on Sunday afternoon at 3:30 PM ET.