Milwaukee Bucks eke out win over the Washington Wizards 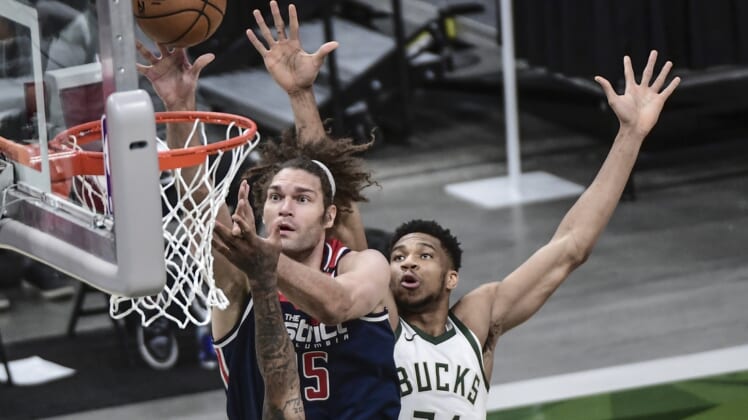 Bradley Beal scored 42 points for Washington (30-36), which lost for just the fourth time in the past 17 games. Russell Westbrook contributed 27 points, 17 assists and 12 rebounds for his 179th career triple-double, two shy of the all-time record held by legendary Oscar Robertson.

Westbrook clinched his 19th triple-double in his past 23 games when he collected his 10th rebound with 6:26 left in the third quarter.

The Bucks were without Khris Middleton (knee) while Washington was missing Rui Hachimura (non-COVID illness). Milwaukee lost P.J. Tucker (jaw) shortly before the midway point of the third quarter after he collided with teammate Jeff Teague.

Milwaukee led 127-124 when Antetokounmpo was called for a charge and fouled out with 1:54 left. After the Wizards moved within one, Connaughton hit two 3-pointers in a 22-second span to give the Bucks a 133-128 lead with 1:04 remaining.

Beal responded with a 3-pointer with 57.5 seconds left, but Milwaukee took a two-possession lead when Brook Lopez slammed home a put-back with 6.8 seconds to play.

Beal hit another 3-pointer with 5.3 seconds to go, and after a Bucks turnover, Washington’s Garrison Mathews saw his 55-foot heave hit the backboard and carom off the rim as time expired.

Westbrook scored eight points during an 11-0 burst to open the fourth quarter as the Wizards turned an eight-point deficit into a 106-103 advantage.

Beal scored 22 first-half points and Washington led most of the opening two quarters before settling for a tie at 71 entering the break.

Milwaukee finished the third quarter with a 10-2 burst to take a 103-95 lead into the final stanza.