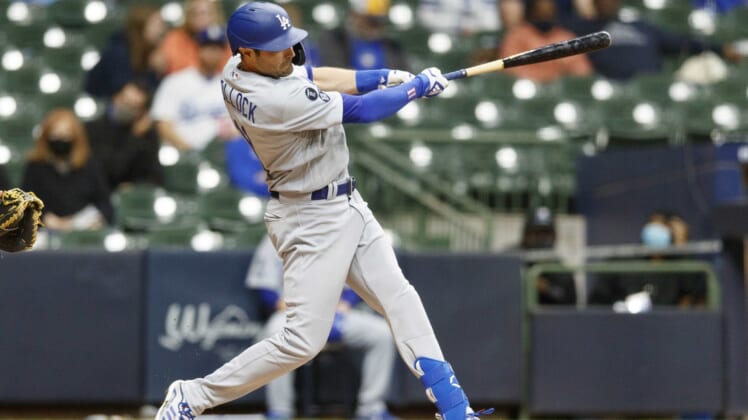 The Brewers took the lead for good in the second inning. Avisail Garcia led off with a single and scored on Bradley’s one-out blast to right field off Edwin Uceta (0-1), who was making his major league debut.

Peralta (3-0) escaped a first-inning jam, then retired 10 consecutive batters before AJ Pollock began the fourth inning with a 412-foot homer to right field. Pollock’s hit was the only one allowed by Peralta, who struck out seven and walked one.

Josh Hader struck out the side in the ninth for his seventh save in seven chances. Milwaukee, which won the opener of the four-game series 2-1 on Thursday, improved to 3-2 on its seven-game homestand.

The Dodgers were held to two hits and scored three runs or fewer for the ninth time in their past 13 games.

Uceta gave up two runs on four hits in two innings for Los Angeles, which fell to 3-9 in its past 12 games.

Bradley’s homer was the 100th of his career as well as his second of the season and first since April 4.

Dodgers center fielder Mookie Betts was held out of the starting lineup with a scheduled day off. Betts has seven hits in his last 36 at-bats (.194) with 11 strikeouts, but manager Dave Roberts said the break wasn’t a reaction to the star’s current slump.

Roberts’ frustration with his team’s struggling offense surfaced with two outs in the top of the eighth when he was ejected by first base umpire Angel Hernandez after arguing balls and strikes.