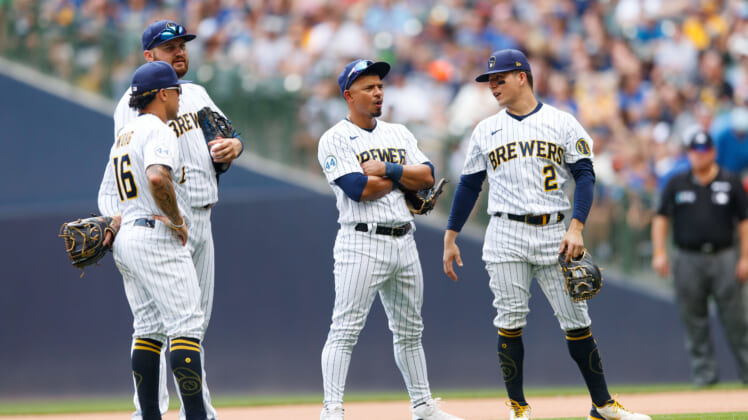 The 2022 MLB season marks the sixth consecutive season where manager Craig Counsell and the Milwaukee Brewers are looking to finally break through in the National League.

At face value, they have a deep and talented team across the board. The key to success is their offense making substantial leaps. Such offensive production is going to have to come from their starting infield.

Here’s why their infield situation makes or breaks the Brewers’ 2022 NL pennant aspirations.

Milwaukee’s 2022 starting infield figures to be, from left to right, Rowdy Tellez, Kolten Wong, Willy Adames and Luis Urias. Three of those players have upside due to their respective skill sets and age.

Tellez, 27, was a midseason enhancement for the Brewers in 2021, becoming their primary first baseman down the home stretch of the regular season. The left-handed hitter has considerable pop in his bat, slugs well and is a respectable defensive first baseman.

Adames, 26, has come into his own as a dangerous everyday shortstop. He has a smooth, line-drive swing from the right side, generates offense and is coming off the best season of his MLB career. Adames was arguably the Brewers’ best hitter last season.

Urias was a sight to behold for the Brewers last season in what was has first full season as an MLB starter. He’s a legitimate power threat who plays multiple positions and is quite possibly the best thing the franchise has going for itself. Urias is 24. The sky is the limit for him.

All the while, Wong is a phenomenal defensive second baseman, a contact hitter and in his prime. This is a defensive savvy infield with youth and two-way upside.

Why can’t Yelich, the Milwaukee Brewers’ franchise player, be the one who leads the charge and makes this offense one of the best in the sport?

Yelich’s MLB career has fallen off a cliff. After putting together two MVP-caliber seasons in 2018 and 2019, he suffered a season-ending knee injury in the latter year. Presumably healthy for the better part of the last two seasons, Yelich has performed along the lines of a fringe starter on a playoff team.

Objectively speaking, anything the Brewers get from Yelich is a bonus. Maybe he indeed gets back on track at the plate, at least somewhat boosting Milwaukee’s offense? Even if Yelich does as such, it won’t be enough to lift the Brewers to the World Series.

The Brewers scored six runs in their NL Divisional Series matchup with the Atlanta Braves last season. The bulk of that group returns with Hunter Renfroe, Andrew McCutchen and the team’s future left side of the infield (Urias and Adames) replacing the free agent departures of Avisail Garcia and Eduardo Escobar. Counsell and friends can’t bank on veterans having breakout seasons.

The Brewers had the best pitching staff from top to bottom last season. Corbin Burnes, Brandon Woodruff, Freddy Peralta, Adrian Houser and Eric Lauer were exceptional. They all posted individual ERAs no higher than 3.22, logged strikeouts at a high rate and were highly efficient.

Meanwhile, Josh Hader, Devin Williams, Brent Suter, Jake Cousins and others made up a high-octane, lights out bullpen. The Milwaukee Brewers had the chance to win every game they played because of how dominant their pitching staff was. In fact, their pitching staff surrendered a combined 12 runs against the Braves in the NLDS — and it still wasn’t good enough. 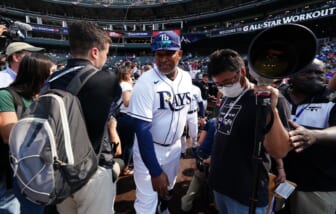 There’s too much talent and potential on the Brewers’ positional depth chart for them to sport a shaky and, at times, anemic offense. Their best bet is the players who are in the raw stages of their MLB careers becoming stars (Tellez, Adames and Urias).

At some point, time will expire on the Brewers. Their starting infield is the only force that can stop the clock. As for 2022, it’s the specific part of their roster that has to answer the bell in emphatic fashion.