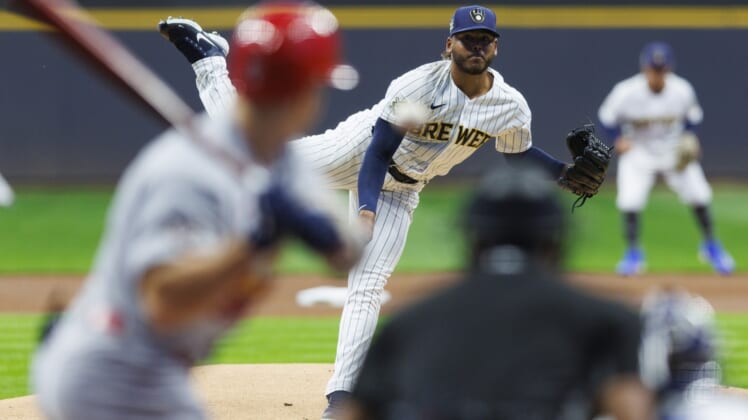 Miles Mikolas took a one-hitter into the seventh inning and the St. Louis Cardinals jumped on Freddy Peralta early, pounding out a 10-1 victory over the host Milwaukee Brewers on Friday night.

Mikolas (1-0) allowed only a single and walk through six innings, both to Rowdy Tellez, before allowing two singles in the seventh. Nick Wittgren entered with two outs and gave up an RBI single to Omar Narvaez, with the run charged to Mikolas.

Mikolas struck out seven in his 91-pitch outing to improve to 6-2 in his career against Milwaukee, his top win total against any team.

Tommy Edman and Nolen Arenado each had a two-run homer to account for the final four runs for the Cardinals, who finished with 14 hits.

St. Louis scored four in the first off Peralta (0-1), who lasted just three innings. He allowed six runs on seven hits, with four strikeouts, two walks and a hit batter as his season ERA rose to 11.57.

With two outs in the first inning, the Cardinals’ Tyler O’Neill doubled and advanced to third on a passed ball. Arenado and Lars Nootbaar walked to load the bases.

After a 35-pitch first inning, Peralta hit Dylan Carlson with his first pitch of the second. Paul Goldschmidt followed with an RBI double to right, and Arenado’s RBI single made it 6-0.

Edman ripped his third homer and second in two games to put the Cards up 8-0 in the fifth.

Arenado hit his fourth home run, off Brent Suter, in the ninth. Suter then came out after crashing hard into the railing of the Cardinals’ dugout on a foul pop by the next hitter.

Mike Brosseau, who came on as a defensive replacement at shortstop to start the inning, moved to the mound for the fifth pitching appearance of his career. Brosseau gave up a single and walk, but no runs.

The Cardinals’ win leveled the four-game series at one win apiece.