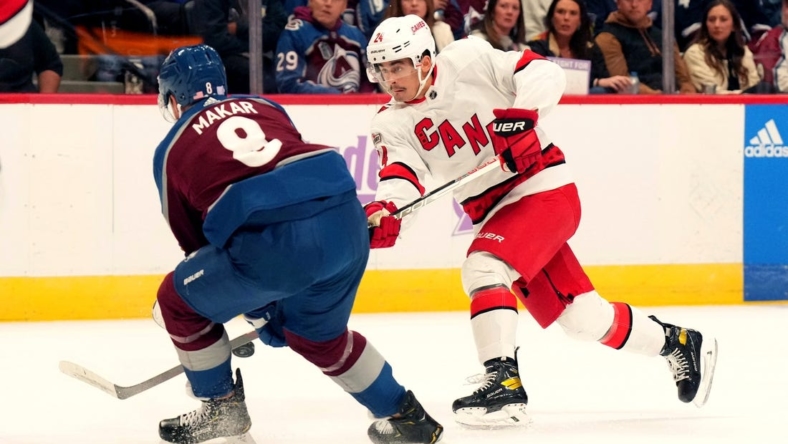 Mikko Rantanen had a goal and three assists, Cale Makar scored twice, and the Colorado Avalanche beat the Carolina Hurricanes 4-1 in Denver on Saturday night.

Nathan MacKinnon had a goal and an assist, and Pavel Francouz turned away 24 shots for Colorado, which has won four in a row.

The Avalanche played the last two periods with five defensemen when Kurtis MacDermid was ruled out with a lower-body injury.

Jordan Staal scored and Antti Raanta made 24 saves for the Hurricanes, who have lost three of their last four.

Makar gave Colorado the lead with a funky power-play goal late in the first period. MacKinnon won the faceoff in the Hurricanes zone, and Rantanen passed the puck to Makar at the point. Makar’s shot went off the backboards, bounced over the net, off of Raanta’s left skate and in at 14:29.

Makar got his second of the night and third of the season a few minutes later. Rantanen had the puck at the left circle, passed through the zone to Makar pinching in, and his wrister beat Raanta at 17:51.

The Avalanche nearly made it a three-goal game in the second period but Raanta stopped Artturi Lehkonen on the doorstep.

Less than a minute later, Carolina got an odd-man rush, and Staal tipped in a pass from Jordan Martinook at 13:55 of the second. It was Staal’s third of the season.

The Hurricanes had some chances to tie it early in the third period, but Colorado got the next tally.

Devon Toews got control of the puck in the Avalanche zone and fed it to Rantanen. He skated into the Carolina end with MacKinnon, fed him with a pass, and MacKinnon’s one-timer went off Raanta and in at 4:17. It was his fourth of the season.

Raanta went off for an extra skater with 2:40 left in the third period, and Rantanen scored into the empty net on a shot from deep in the Colorado end at 17:50. It was his 10th of the season.