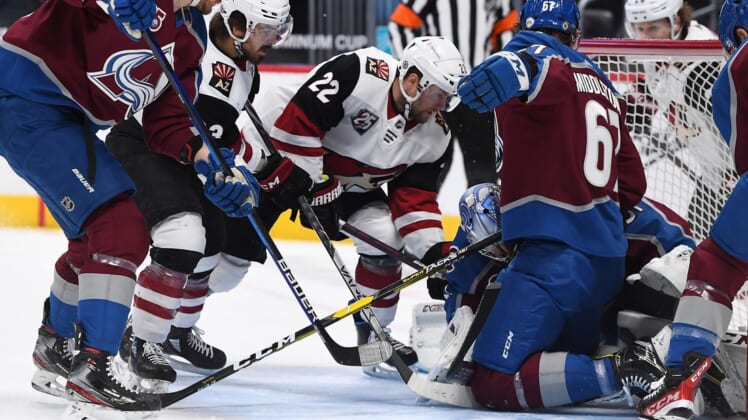 Mikko Rantanen had two goals, Nathan MacKinnon added a goal and an assist, and the Colorado Avalanche beat the Arizona Coyotes 4-2 on Monday in Denver.

Brandon Saad also scored, Cale Makar had two assists and Philipp Grubauer stopped 35 shots for the Avalanche, who are 16-1-2 since March 10.

Michael Bunting and Johan Larsson scored goals and Ivan Prosvetov made 16 saves for the Coyotes, who have lost four in a row.

Arizona had the lead for a moment midway through the first period, but a pair of reviews awarded the Coyotes a goal and then took it away.

The first review determined that the puck crossed the goal line during a pileup in the crease. Colorado challenged for goaltender interference, and the second review confirmed that Grubauer’s pad was pushed into the net by Larsson’s stick, negating the goal.

The Avalanche took the lead later in the first period when Samuel Girard passed the puck to Saad, who backhanded it by Prosvetov at 12:17. It was his 13th of the season.

MacKinnon gave Colorado a 2-0 lead on the power play when his slapshot from the left circle beat Prosvetov at 9:08 of the second period. It was his 17th of the season.

The Avalanche added to their lead late in the second. Makar carried the puck around the back of the net and gave it to MacKinnon, who fed Rantanen in front. Rantanen’s shot went off the leg of Arizona defenseman Oliver Ekman-Larsson and through Prosvetov’s pads at 18:03.

The Coyotes broke through when Bunting scored on the power play at 10:42 of the third, his sixth of the season, and Larsson made it 3-2 when he scored his seventh goal at 13:16. Arizona pulled Prosvetov for an extra attacker with 2:13 left, and Rantanen scored just 16 seconds later to restore the two-goal lead.

The tally was Rantanen’s 25th.

Colorado added another forward just before the Monday afternoon trade deadline, acquiring Carl Soderberg from the Chicago Blackhawks for two prospects. It will be Soderberg’s second tour with the Avalanche.