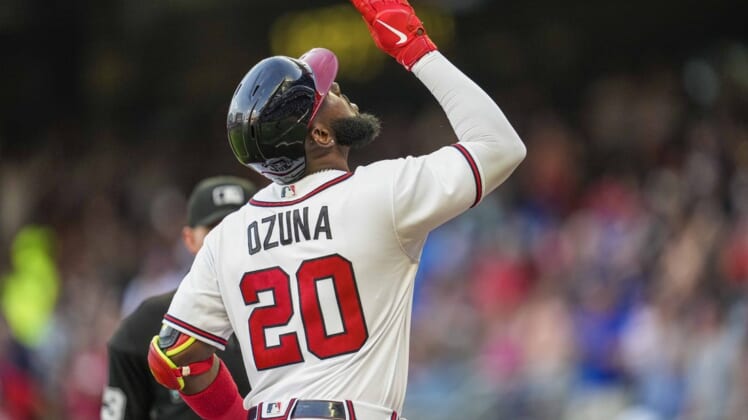 Mike Yastrzemski broke out of a slump with a two-run double that put the visiting San Francisco Giants ahead to stay and led to a 12-10 win over the Atlanta Braves on Tuesday.

Yastrzemski was in a 1-for-19 rut over a seven-game span prior to the hit. After reliever Darren O’Day loaded the bases to start the sixth, Yastrzemski greeted Collin McHugh with a line drive double to right, scoring Wilmer Flores and Austin Wynns, with Luis Gonzalez thrown out at home.

The Giants scored four runs in the second inning on Brandon Crawford’s sacrifice fly and a three-run homer from Wynns, his first since being acquired on June 8.

Atlanta made it 4-2 in the bottom of the second on a two-run homer from Marcell Ozuna, his 13th, then took a 5-4 lead on Matt Olson’s three-run homer, his ninth, in the third.

San Francisco regained the lead by scoring twice in the fourth. Wynns drove in a run with a double and Luis Gonzalez hit a sacrifice fly to center that scored Brandon Crawford, who was originally called out but had the call overturned after a video review. Crawford sustained a left knee contusion on the play at the plate and was removed from the game in the bottom half.

After the Giants took the lead, they tacked on a run when Joc Pederson hit a solo homer, his 15th, in the seventh. San Francisco iced the game with three runs in the ninth, via an RBI single from Thairo Estrada and a two-run single by Flores.

Olson homered again in the ninth, a two-run shot. It was the 12th multi-homer game of his career.