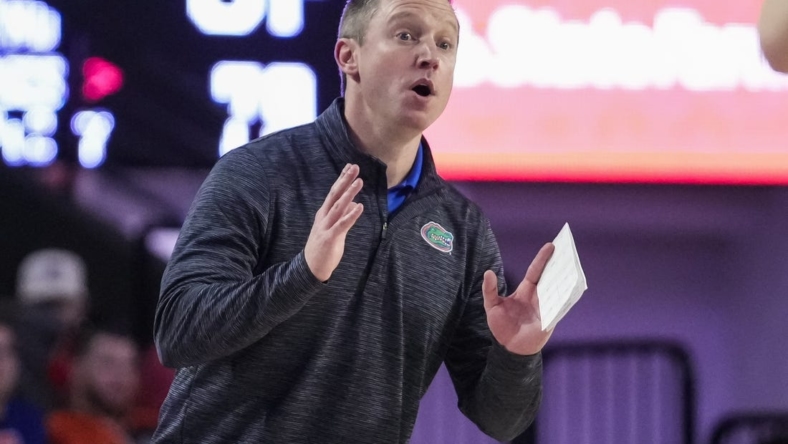 Kario Oquendo scored 18 points as host Georgia ushered in the Mike White era by withstanding a second-half challenge from Western Carolina in a 68-55 victory Monday night in Athens, Ga.

Two days after Georgia’s top-ranked football team stayed unbeaten with a 27-13 win over Tennessee, the basketball program won the debut of White, who was hired from Florida after Tom Crean went 47-75 in four seasons.

White’s debut saw the Bulldogs (1-0) lead the entire way but not without some shaky moments in the final 20 minutes.

Oquendo, a second-team preseason All-SEC pick, shot 7 of 11, including two big hoops in the second half to fend off Western Carolina’s comeback try as the Bulldogs ended the game by outscoring the Catamounts 18-9 over the final eight-plus minutes.

Frank Anselem added 11 points in his Georgia debut after spending the previous two seasons at Syracuse. Terry Roberts contributed eight points after taking some time away from the team due to personal reasons as Georgia shot 49.1 percent and survived committing 21 turnovers.

Tyzhaun Claude led Western Carolina with 18 points and seven rebounds but the Catamounts (0-1) started by missing 12 of their first 13 shots, shot 35.1 percent and fell to 0-9 all-time against Georgia. Tre Jackson added 17 points in his debut for Western Carolina after transferring from Iowa State.

Oquendo’s layup gave Georgia its first double-digit lead at 15-5 with 11:43 remaining and the lead reached 30-12 a little over five minutes later when he sank a 3-pointer. After Western Carolina inched closer with a 10-4 run to get within 34-22, Oquendo hit a 3-pointer with 21 seconds left for a 37-22 halftime lead.

Consecutive baskets and a free throw by Oquendo pushed Georgia’s lead to 57-46 with 5:51 left. The Bulldogs finished it off with 2:48 remaining when Oquendo found Anselem for a dunk.