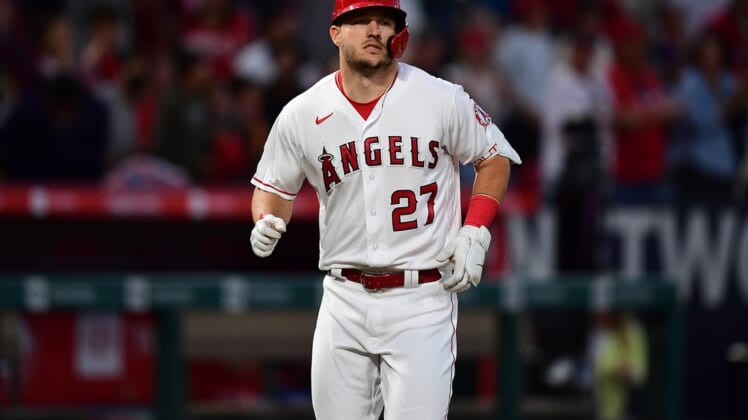 The two homers marked Trout’s 21st career multi-homer game, setting a club record, but both came with the bases empty. Brandon Marsh’s two run homer in the sixth gave the Angels a 4-2 lead before the Orioles went ahead with a three-run seventh inning.

All three runs were unearned, the result of usually reliable third baseman Anthony Rendon, whose throwing error was the key to the inning.

Rendon had just made a diving catch of a line drive to rob Jorge Mateo of a hit when the next batter, Anthony Santander, hit a chopper to Rendon at third.

But Rendon’s throw to first was high and pulled first baseman Jared Walsh off the bag.

Trey Mancini’s sacrifice fly made it 4-3 before Ryan Mountcastle had a two-run single off Angels reliever Ryan Tepera, which proved to be the game-winner.

The Angels threatened to tie or go ahead in the eighth, putting runners on second and third with one out. But Baltimore reliever Joey Krehbiel worked his way out of the jam and held the lead.

Orioles closer Jorge Lopez gave up a single to Trout in the ninth but nothing else and closed it out for his fourth save. Orioles reliever Bryan Baker (1-0) earned the win over Angels reliever Aaron Loup (0-1).

The Orioles took the lead in the top of the first inning against Angels starter Noah Syndergaard, scoring two runs while getting only one hit – an RBI single by Mountcastle – in the inning. But they also got a walk, hit batsman, three stolen bases (two by Cedric Mullins) and a sacrifice fly.

The Angels got one run back in the bottom of the first on Trout’s first homer of the game off Orioles starter Spenser Watkins. Trout got Watkins again in the fifth inning with his second homer, also with no one on base, tying the game at 2-2.

Syndergaard, who won his first two starts of the season, struck out the first two batters in the sixth but gave up a walk and single to the next two hitters and was removed from the game.