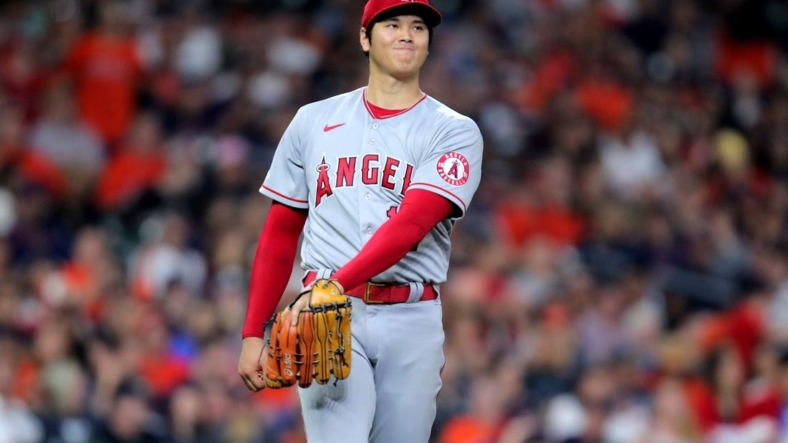 Trout went 2-for-4 with a home run — his sixth straight game with a homer — a double, a walk and three RBIs. He capped the Angels’ four-run second inning with a three-run shot off Astros right-hander Jose Urquidy, a 361-foot shot to left field that scored Max Stassi and Luis Rengifo and extended the lead to 5-1.

Trout’s 34th bomb of the season gave him the club record for homers in consecutive games, surpassing Bobby Bonds’ run of five straight in August 1977. The last player with a longer streak was Joey Votto, who homered in seven consecutive games for Cincinnati from in July 2021. Trout has nine RBIs during his streak.

Urquidy (13-6) surrendered 10 hits, walked one batter and struck out four over five innings. He shut out the Angels over seven innings in his previous start on Sunday.

Ohtani (12-8) departed immediately after taking the mound to warm up prior to the bottom of the sixth with a blister on his right index finger. He was met by catcher Stassi and interim manager Phil Nevin plus two additional Angels personnel before preparing for the frame.

After a brief discussion, he returned to the dugout and was replaced by Jimmy Herget.

Ohtani allowed one run on six hits and two walks with seven strikeouts. He threw 79 pitches, 48 for strikes, and touched 101.4 miles per hour with his four-seam fastball, a career-best velocity, while recording a strikeout of Kyle Tucker with two runners in scoring position to cap the third.