Mike Trout (back) exits as Angels lose to Astros 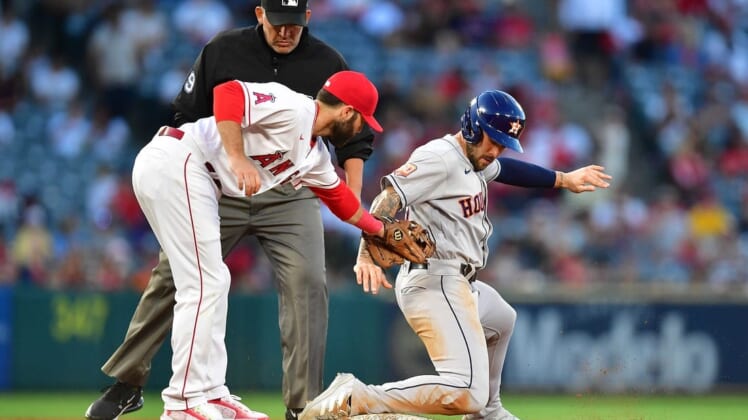 The Angels also lost center fielder Mike Trout, as the recently named All-Star left the game in the fifth inning because of muscle spasms in his upper back.

Los Angeles tied the game at 5-5 with four unearned runs in the seventh inning, and the contest remained tied heading to the ninth.

Angels reliever Raisel Iglesias (2-6) began the final frame by walking Altuve, who went to third on a single by Aledmys Diaz.

Tucker followed with a double to right field on a 1-1 fastball from Iglesias, sending the Angels to their fifth loss in a row and ninth in 10 games.

Ryan Pressly pitched a perfect ninth inning for Houston to record his 19th save. Hector Neris (2-3) got the win after tossing a scoreless eighth inning.

The Astros took the lead quickly against Angels starter Noah Syndergaard, going up 2-0 two batters into the game. Altuve led off the first inning with a walk and scored on Diaz’s two-run homer.

The Angels answered with a run in the bottom of the first against Astros starter Luis Garcia, who walked the bases loaded with one out. Jared Walsh drove in a run with a groundout, but Garcia was able to avoid further damage.

Alex Bregman’s RBI single in the third inning off Syndergaard increased Houston’s lead to 3-1. Syndergaard pitched into the fifth inning, but when the first two batters reached on an error and a walk, he was removed from the game.

The Astros added a couple runs against the Angels’ bullpen in the sixth, scoring two on a single by Altuve. One of the runs was unearned because of an error by Monte Harrison, who replaced Trout in center field, with Houston taking a 5-1 lead.

The Angels tied the game in the seventh, scoring four runs on just one hit. They had two walks and a hit batter, and the Astros defense helped out with two errors and a passed ball.

The lone hit in the inning was a two-run, two-out pinch single by David MacKinnon.