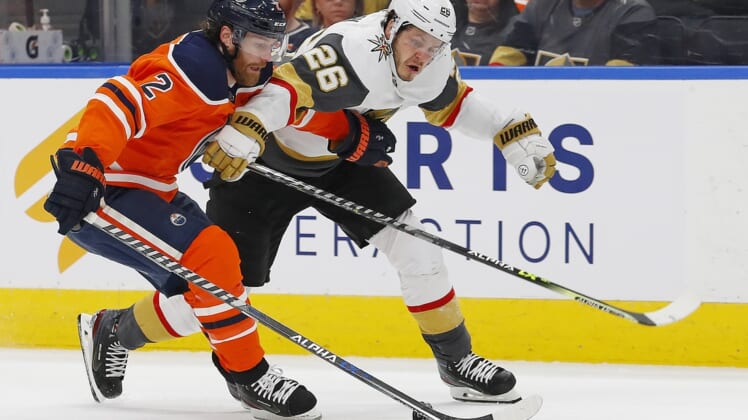 The 40-year-old Smith made 39 saves for the 44th shutout of his 16-year career. Smith blanked host Nashville by the same 4-0 score Thursday.

Logan Thompson stopped 32 of 36 shots for the Golden Knights. Thompson got the start after fellow netminder Robin Lehner had to return home to Las Vegas because of a family health issue.

Ryan McLeod made a cross-ice from the right faceoff circle to a wide-open Zack Kassian at the left post. Thompson went down and it appeared Kassian had a chance to lift the puck over him, but instead he dropped a pass back to Russell for a one-timer from the top of the left faceoff circle.

Ceci made it 2-0 just 35 seconds into the third period, his shot from the right point beating a screened Thompson after the Oilers won a faceoff in the offensive zone. Darnell Nurse and Kane were credited with assists.

Foegele extended the lead on an unassisted breakaway at 5:16 of the third, putting a backhander past Thompson.

Nugent-Hopkins scored a short-handed goal at 15:32 of the third to ice the victory after skating the puck down the right wing and centering a pass to Kane, who was originally credited with the goal.