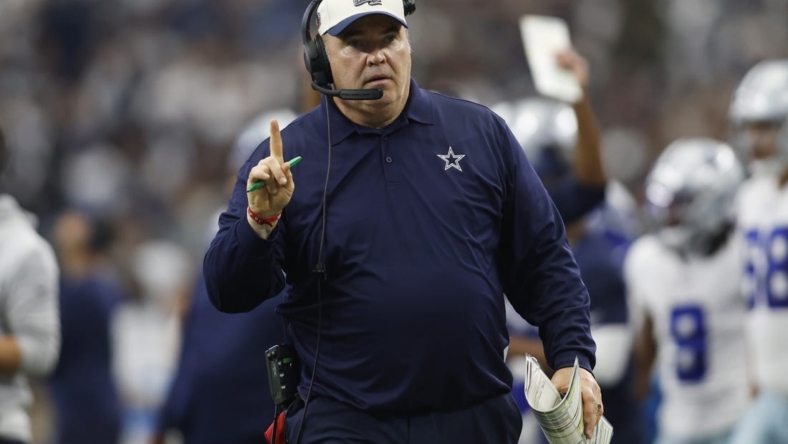 Mike McCarthy will be back on the sideline of familiar Lambeau Field when he guides the Dallas Cowboys against the Green Bay Packers on Sunday.

It marks the first time that McCarthy will coach the Cowboys against the Packers, a team he guided to four NFC Championship games and one Super Bowl title during a tenure from 2006-18.

The pain from being fired has dissipated and McCarthy is looking forward to viewing the scene in Green Bay.

“I was there 13 years. That’s a long time. That’s a loooong time,” McCarthy said. “So you don’t ever stay the same in this game, especially as a head coach, as a successful team. You’re either getting better or going the other way. I really don’t have any issue with the change.”

But Green Bay missed the playoffs in 2017 and was struggling again the following season when McCarthy was dismissed with four games remaining.

“The exit, it left a dent, just to be honest, with our family,” McCarthy said. “But it’s been four years. We’re so much better because of it.”

While the Cowboys (6-2) are coming off a bye and thriving this season, the Packers (3-6) are reeling with five consecutive losses.

The worst setback came last week when Green Bay fell 15-9 to the Detroit Lions. It marked the third time this season that the Packers scored 10 or fewer points.

Long-time star Aaron Rodgers threw three interceptions against the Lions and hasn’t passed for 300 yards in a game all season.

The four-time MVP has passed for 2,091 yards, 14 touchdowns and seven interceptions. But he surely didn’t expect to go at least six weeks between victories when he chose to return for the 2022 season.

“When I decided to come back, it was all in and I don’t make decisions on hindsight 20/20, you know, have regrets about big decisions like that,” Rodgers said.

Rodgers doesn’t have the smoothest relationship with the Packers organization and also experienced friction with McCarthy during the latter stages of their partnership.

McCarthy is only interested in rehashing the good times.

“I’m really looking forward to seeing Aaron,” McCarthy said. “We’ve had great communication. I have nothing but love and gratitude for him.”

Rodgers said being away from McCarthy has made him more thankful for the time together.

“I think as time goes by, the gratitude for that time as you look back on the journey of your career goes up a little bit,” Rodgers said. “I appreciate the little things a little bit more because really this game and life is about the journey. I’ll always be tied with him because of the connection that we had and the years we spent together.”

Rodgers has been bothered by a sore thumb on his throwing hand and didn’t participate in Wednesday’s practice.

The biggest injury blow involves linebacker Rashan Gary, who was placed on injured reserve Wednesday due to the ACL injury he sustained against the Lions. Gary leads the Packers with six sacks.

Running back Aaron Jones (ankle) was limited in practice while linebacker De’Vondre Campbell (knee) and receiver Romeo Doubs (ankle) were among the players who sat out. Doubs is expected to miss at least a month.

Dallas running back Ezekiel Elliott (knee) was limited and hopes to return after sitting out a 49-29 win over the Chicago Bears on Oct. 30. Linebacker Anthony Barr (hamstring) sat out practice. Meanwhile, defensive end Tarell Basham (knee) is expected to play for the first time since being hurt in Week 1.

Green Bay has won eight of the past nine matchups (regular and postseason), including the most recent encounter in 2019 — 34-24 in Arlington, Texas.