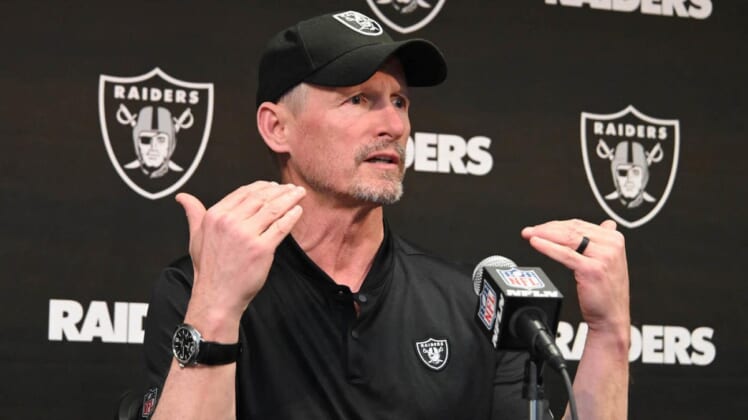 In a conference call with media on Tuesday, Las Vegas Raiders general manager Mike Mayock talked about the team’s virtual offseason plans amid COVID19 and his approach to next week’s NFL Draft.

The Las Vegas Raiders held a conference call with general manager Mike Mayock on Tuesday that gave insight to the team’s plan in the interim amid the COVID19 crisis and the leadup to the NFL Draft next week.

Those looking for true insight and tips to what he and coach Jon Gruden may do in the first round next left unfulfilled.

As most NFL teams do right about now, Mayock didn’t tip his hand much at all instead talking in-depth about the challenges facing all NFL team’s with a virtual draft and offseason in the middle of a pendemic.

And despite the challenges, Mayock wasn’t as concerned with how the Raiders might do in the draft, but instead was self-deprecating talking instead about his own technological challenges.

“I kind of laugh because everybody talks about this virtual draft, and how high tech it is,” Mayock said when asked about challenges facing him and other NFL teams with the draft format. “If you could see my living room right now, it’s the ultimate in low tech. I’ve got five huge whiteboards, and I probably have 1000 magnets with names on them all over the place. So I kind of feel like I’m sitting in the middle of a 1976 draft room. And it’s kind of Back to the Future.”

Mayock continued to say that no team has an advantage with the altered format and the lack of in-person interaction and the draft’s normal format hasn’t dampened excitement for him and the team.

“We’re all doing it the same way, you know, nobody’s got an advantage,” Mayock said. “…the Raiders are 100% prepared and ready to go and we’re excited about this draft.”

The Raiders enter the 2020 NFL Draft with seven picks overall including two first-round selections, three third-round picks, and one pick in each of the fourth and fifth rounds.

Mike Mayock also addressed questions about two key areas of need for the team: wide receiver and cornerback. Although he didn’t let on who the team might favor at wide receiver, should the go that way in the first round, he did talk about depth in the draft at the position and how each player has their own set of abilities that are unique to them.

“I think the wideout position (in the draft) this year is pretty cool,” Mayock said of the plethora of options throughout. ” The average is about 13 wide receivers, typically get drafted in the first three rounds of the draft, over the last five years. And I think you could have plus or minus 20 of them that are graded that way. I’m not saying they’ll go that way but they’re certainly graded that way.

“There’s no secret we need to get better at wideout we understand that.  But we still need to get better at wideout. And again, it’s kind of like the corner conversation I think you got to let it come to you a little bit, and whether it’s in the first round, second round, third down, fifth round – I’m hoping we can find a wideout that fits what the Raiders need and fit our culture.”

When asked again about wide receivers and about the Top 3 prospects at the position – Jerry Jeudy, Henry Ruggs III, and CeeDee Lamb – Mayock didn’t indicate a favorite saying Jon Gruden’s offense can shift to fit whichever player they decide to draft.

He also said the player they choose to go with at wide receiver might not necessarily have to be in the first round, but he did acknowledge the special nature of Jeudy, Ruggs and Lamb.

I think the three guys who mentioned all have different strengths,” Mike Mayock said when asked specifically about the three. “I think they’re all high level players. And yes, I think fit is important. And that’s been kind of the fun thing to talk to him (Gruden) about. What does this guy do versus what does that guy do for you. We’ve had some great conversations about and I’m sure we’ll continue to up until the draft.”

The Mayocks Give to Help Fight COVID-19 in Las Vegas

At the beginning of the call, Mayock lauded both owner Mark Davis and current Raiders players for their charity work during the pandemic. He and his wife Mandy are donating $1,000 in the name of each Raiders draft pick this year to Delivering With Diginity in Clark County. The charity helps those most at risk to the coronavirus with a multitude of help. Learn more about the organization here: www.DeliveringwithDignityLV.org