Mike Leach on SEC realignment: ‘Let me handle that’ 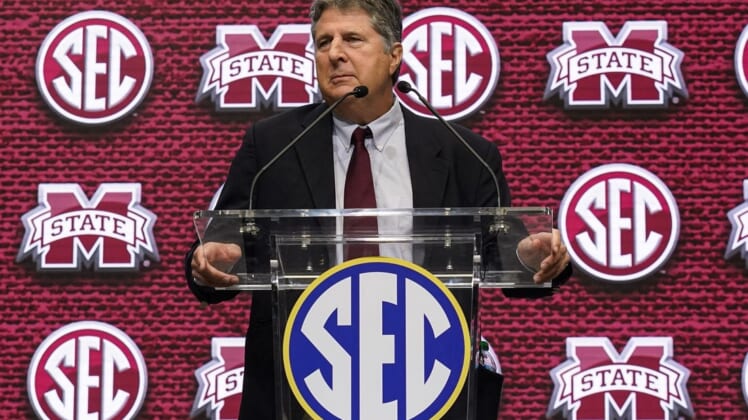 Mississippi State coach Mike Leach said realigning the SEC will be a snap when Texas and Oklahoma arrive in 2025.

“They oughta let me handle that,” Leach said Tuesday at SEC Media Days in Atlanta. “I’ll have that done by lunch. I think it would be brilliant to let me handle it.”

Leach suggested moving Alabama and Auburn to the SEC East and letting Oklahoma and Texas join his Bulldogs in the SEC West.

“You knock those guys off and send them to the East and we have to play Texas and OU, tell me how I’ve lost on that deal,” Leach said. “I have a lot of respect for those guys, but in this conference they can just go ahead and get in line with everybody else.”

Leach, 61, is entering his third season in Starkville, Miss. Mississippi State finished 7-6 last season after going 4-7 in his first year on campus in 2020.

Leach coached against Texas and Oklahoma in the Big 12 at Texas Tech from 2000-09.

Never shy about giving an opinion, Leach touched on a wide range of subjects during his time on the dais Tuesday, Topics included the beef between Alabama coach Nick Saban and Texas A&M’s Jimbo Fisher over name, image and likeness deals, as well as the dance moves of LSU’s Brian Kelly and South Carolina’s Shane Beamer.

Back in May, Saban made a crack that Texas A&M “bought every player on their team.” Fisher insisted the Aggies broke no rules and questioned Saban’s character, with both coaches ultimately receiving reprimands from the SEC.

Leach said the current NIL situation — Saban said his players earned more than $3 million in deals in the past year — is “not sustainable.”

“I think they both kind of illustrate the frustration of how things are right now and it’s not sustainable, so something’s going to change,” Leach said. “We haven’t defined what exactly is an amateur, or a student-athlete, as opposed to a professional, and I think we need to do that. I think there is ways to do it.”

As for dancing coaches, Leach gave Beamer the nod over Kelly after the South Carolina coach’s performance went viral on Tuesday.

“Some of those guys are into this stuff,” Leach said. “I mean, can you imagine that? (Beamer) is definitely up there. Let’s think this through. I don’t know, you’ve got to give Coach Kelly an A for effort. But I do think it was more effort than ability. I don’t know, maybe Beamer. I think Beamer is the guy to beat right now.”

Mississippi State opens the season at home against Memphis on Sept. 3.