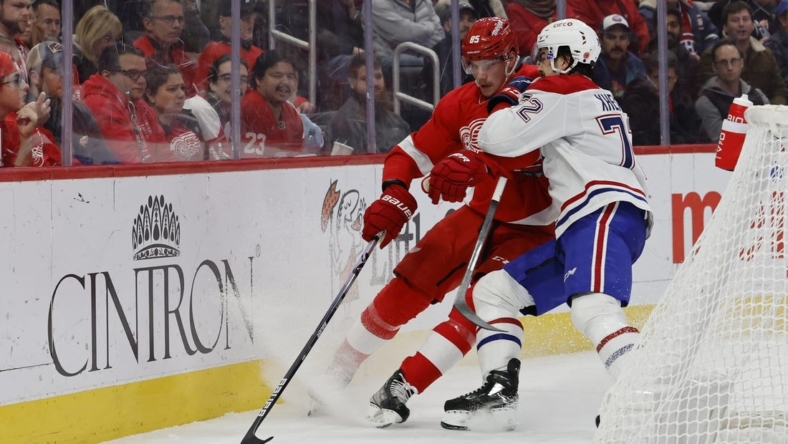 The Canadiens won the shootout 2-1 as Cole Caufield and Nick Suzuki got the puck past Ville Husso. Montreal also killed off seven Wings power plays.

Austin Czarnik scored his first goal in a Detroit uniform and Lucas Raymond notched his fifth of the season for the Red Wings, who had won three straight. Husso stopped 31 shots.

Hoffman scored his first goal of the contest 5:41 into the game, firing in a rebound of Gallagher blast from the left side. Jordan Harris had the second assist.

Dylan Larkin had a chance to tie it when he was awarded a penalty shot after being slashed on a breakaway by Kirby Dach. However, Larkin was unable to get off a clean shot against Allen.

Detroit soon tied it when Czarnik scored in front off a Kubalik feed. Andrew Copp collected the second assist.

Hoffman made the score 2-1 with 16 seconds left in the period when he deposited another rebound of a Gallagher shot behind Husso. Christian Dvorak also notched an assist.

The Canadiens committed three penalties in the second period but the Red Wings couldn’t even the score.

David Savard, who had one of those penalties, was assessed a 10-minute misconduct penalty at the end of the period for arguing too vociferously.

Detroit kept the pressure up and finally knotted the contest when Raymond converted from the left side off a Pius Suter pass midway through the third period. Filip Hronek picked up the second assist.

Montreal’s Juraj Slafkovsky shoved Matt Luff face first into the boards, resulting in a five-minute major boarding penalty and a game disqualification with 5:32 remaining. That power play was interrupted by an interference call against Detroit’s Elmer Soderblom with 3:34 left. Once again, the Wings came up empty.

Larkin banged a shot off the crossbar in the opening minute of overtime.