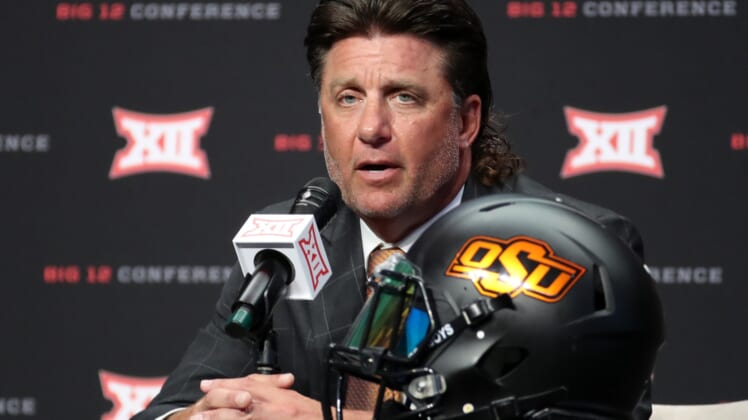 Oklahoma STate’s football coach briefly apologized alongside star running back Chuba Hubbard on Monday then issued a stronger message on Tuesday. Now, Gundy is coming forward again to talk about his actions and the decision to wear an OAN shirt.

Mike Gundy: “I was a dumbass” for wearing OAN shirt

Gundy spoke with ESPN+ this week about his discussions with Hubbard, who helped create awareness for the OAN shirt and threatened to sit out if changes weren’t made. In the interview, Gundy said he wore the shirt without understanding the impact it would have on his players and some of the controversial views held by OAN.

“I didn’t know some of the stances they [OAN] had taken,” Gundy said, via ESPN. “I didn’t know that. But then you look at it and say, ‘OK, I was a dumbass.’ I put the shirt on, not knowing enough about the shirt.”

OAN, a far-right news channel, has been around since 2013. In April, Gundy expressed his appreciation for the news network and their approach to reporting the news. At the time, Oklahoma State’s coach praised the network for being “refreshing” and reporting the news with no opinions.

After hearing anger earlier this week from Oklahoma State’s players and those around the community, Gundy has since taken a second look at OAN and changed his stance.

“I understood exactly why the players got frustrated when they found that out,” Gundy said, via ESPN. “I didn’t know. I didn’t know until the next day. Well, I knew that night, but I didn’t confirm it until I did a little research, and I was like, ‘What a dumbass.’ So, that was my fault.”