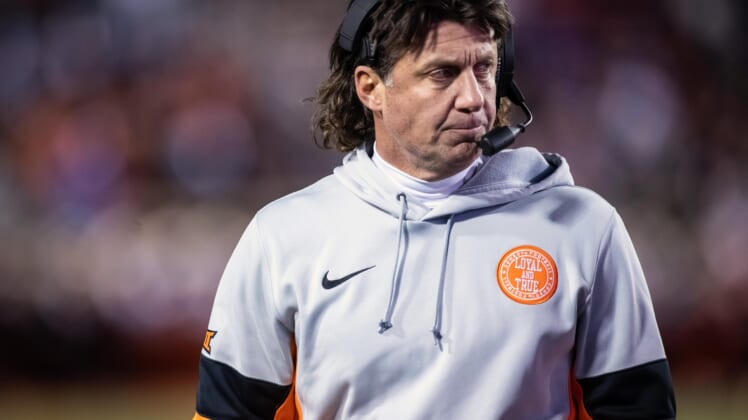 One day after distinctly not apologizing for wearing an OAN T-shirt, Oklahoma State head coach Mike Gunday did so in a video message shared on Twitter.

Gundy released a one-minute video on Tuesday. He said he and the players held a team meeting, during which the players were able to communicate how OAN (One American News network) has called the Black Lives Matter movement “a farce.” Gundy apologized for wearing the shirt.

“They helped me see through their eyes how the T-shirt affected their hearts. Once I learned how that network felt about Black Lives Matter, I was disgusted and knew it was completely unacceptable to me. I want to apologize to all members of our team, former players, and their families for the pain and discomfort that has been caused over the past two days. Black Lives Matter to me. Our players matter to me.”

Gundy also promised that the meetings the team had “will result in positive changes for Oklahoma State football.”

Here’s the video in its entirety.

Chuba Hubbard brought this all to light with a holdout threat

Gundy was out for a fishing trip recently and took a picture afterward. In the picture, he was wearing an OAN shirt. As the picture circulated on social media Monday, Heisman candidate Chuba Hubbard reacted with a strong threat to hold out “until things CHANGE.”

As Hubbard’s post began to circulate, Timothy Burke shared exactly why Hubbard was upset about the OAN shirt.

Hubbard and Gundy issued a short video message later Monday. In it, Gundy promised “change” but did not apologize. Hubbard, on the other hand, did apologize for the way he went about handling his part on social media. Many jumped to his defense saying that wasn’t necessary, while expressing frustration that Gundy did not apologize.

On Tuesday morning, Hubbard responded to all of this with another, more measured tweet saying “from now on we’re gonna focus on bringing change, and that’s the most important thing.”

Now that Gundy has officially apologized and appears to have the support of his players once more, the Cowboys will have the eyes of the nation on them to see what happens next.