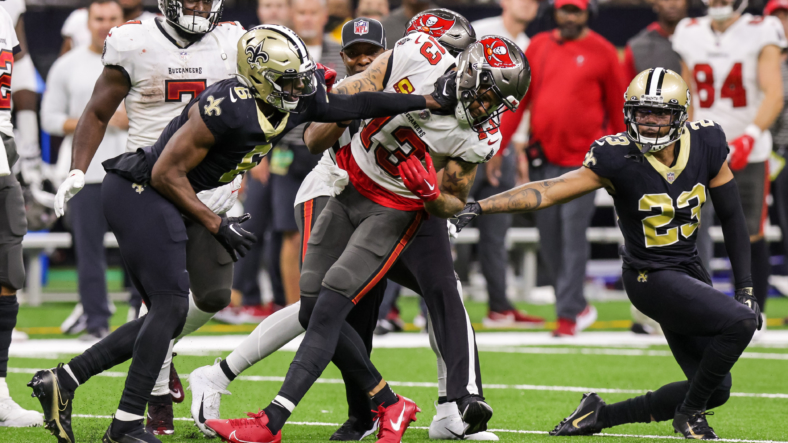 Tampa Bay Buccaneers wide receiver Mike Evans and New Orleans Saints cornerback Marshon Lattimore have a history with one another. Said history dates back about a half-decade and reared its ugly head during Sunday’s game.

Both Evans and Lattimore were ejected from the Week 2 game after getting into a fight. It was not a great scene inside the Caesars Superdome in New Orleans.

Officials worked quickly to make sure that the two were booted from the game before the drama intenstified. It had also included Lattimore and Buccaneers quarterback Tom Brady going at it before the ejections. It now looks like both the Pro Bowl wide receiver and his counterpart at cornerback could be suspended.

Related: Marshon Lattimore and the top-100 NFL players of 2022

Mike Evans and Marshon Lattimore have a history

Back in November of 2017, Evans blindsided Lattimore during a game between the two long-time division rivals. The play in question was about as ugly as it gets, leading to Evans getting suspended for a game while Lattimore escaped a ban.

“During the third quarter, after a play had ended, you struck and unsuspecting opponent in the back, knocking him to the ground. Your conduct clearly did not reflect the high standards of sportsmanship expected of a professional.”

NFL letter to Mike Evans notifying him of suspension (November, 6, 2017)

You better believe that the NFL will take this situation into account when determining whether both players will be suspended or their on-field conduct Sunday.

“According to a source with knowledge of the situation, the NFL will indeed consider suspensions for Evans and Lattimore, given their history of extracurricular activities,” Pro Football Talk’s Mike Florio reported on Sunday.

This could have wide-ranging ramifications for both teams. Tampa Bay is set to take on the Green Bay Packers next week with the New Orleans Saints going up against Carolina.

In particular, a potential Evans suspension could hurt Tampa Bay. The team was already without Chris Godwin (hamstring) and Julio Jones (knee) for Sunday’s game against New Orleans.

It led to Tampa Bay being shutout in the first half as Brady took his frustration out on a tablet. While the Buccaneers did come back to win on Sunday, playing without Mike Evans could be a big deal against Aaron Rodgers and the Packers come Week 3.