Mike D’Antoni seen as favorite for Charlotte Hornets’ next coach 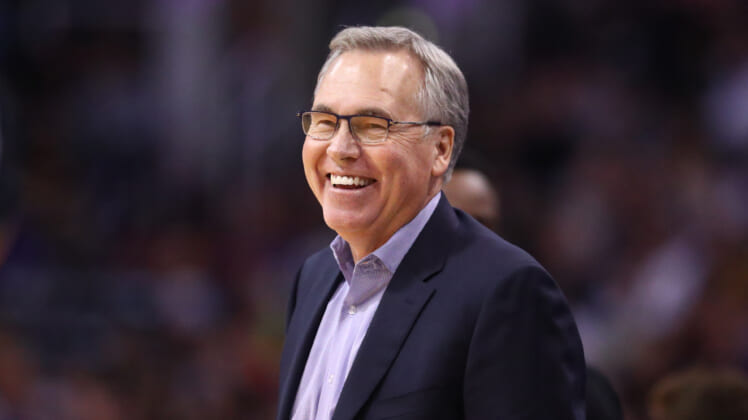 The Charlotte Hornets are reaching another stage of their head coaching search after identifying some initial candidates to replace James Borrego. One of the experienced coaches they’ve already interviewed, Mike D’Antoni, is reportedly now seen as the favorite to become the 12th head coach in franchise history.

Steve Bulpett of Heavy.com notes three league sources point to D’Antoni being the current leader to coach LaMelo Ball and Co. next season.

One source even added a breakdown of D’Antoni’s fit with the Hornets.

“I don’t think it’s a done deal or anything, but I know they like the idea of what he can do with LaMelo (Ball) and their running game. If D’Antoni can get those guys on his wavelength, that’s going to be an even more fun team to watch.”

Coach D’Antoni’s accomplishments have him in the lead

If hired, D’Antoni brings 1,199 games of NBA head coaching experience and a career win percentage of .560. He has brought his teams to the Conference Finals three times, twice with the Phoenix Suns, and once with the Houston Rockets. D’Antoni also coached the New York Knicks and Los Angeles Lakers, but those tenures weren’t as successful.

There is no word on exactly when the Hornets plan to make their final decision on their next head coach, but for now, D’Antoni seems to be the top name on their list.

For now, D’Antoni works as a coaching advisor with the New Orleans Pelicans, but now appears ready to be a head coach again, at the age of 71. He just might get that chance with the Hornets.