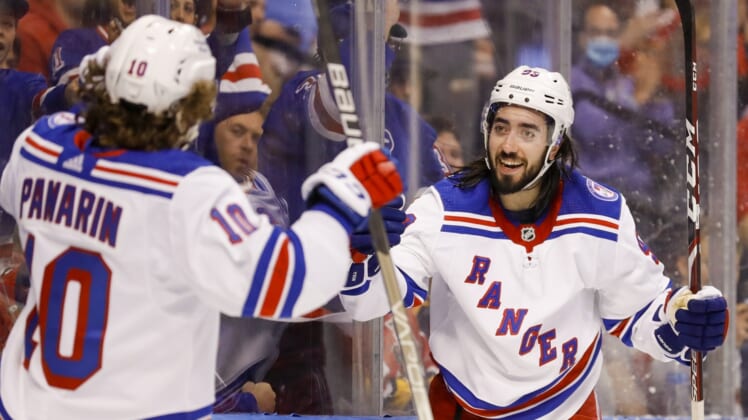 After scoring the only shootout goal in Friday’s win at Tampa Bay, Zibanejad recorded his seventh hat trick since joining the Rangers in 2016 as the Rangers completed the home-and-home sweep.

New York improved to 9-2-1 in its past 12 home games as Zibanejad recorded his fourth multipoint performance in five games.

Ryan Strome also scored while Chris Kreider tied a career-high with three assists as the Rangers survived the absence of Artemi Panarin, who was placed in the NHL’s COVID-19 health and safety protocol before the game.

Igor Shesterkin made 38 saves for his second shutout of the season and fourth career shutout. He made 18 saves in the opening period when the Rangers opened a three-goal lead and was aided by a defense that blocked 18 shots and held Tampa Bay star Steven Stamkos to one shot on goal.

Tampa Bay goalie Andrei Vasilevskiy returned from a two-game absence in the protocol and allowed four goals on 21 shots. Vasilevskiy lost for the first time in eight appearances, absorbing his first defeat since Nov. 28 at Minnesota.

The third consecutive defeat for the Lightning ties their longest skid of the season as they were blanked for just the second time.

Zibanejad scored twice in a span of 4:53 midway through the first. He made it 1-0 with a wrist shot from the left circle that sailed under the crossbar 7:44 into the period and got another when his pass through the slot for Kappo Kakko was deflected by Tampa Bay defenseman Ryan McDonagh into the net at 12:37.

Strome made it 3-0 a little more than two minutes later when he got the puck from Barclay Goodrow and lifted a wrist shot past Vasilevskiy.

Zibanejad got his hat trick late in the second period by making a defensive play along the boards, crashing the net and redirecting a pass from Kreider into the net. Tampa Bay challenged for a high-stick, but the goal was upheld.