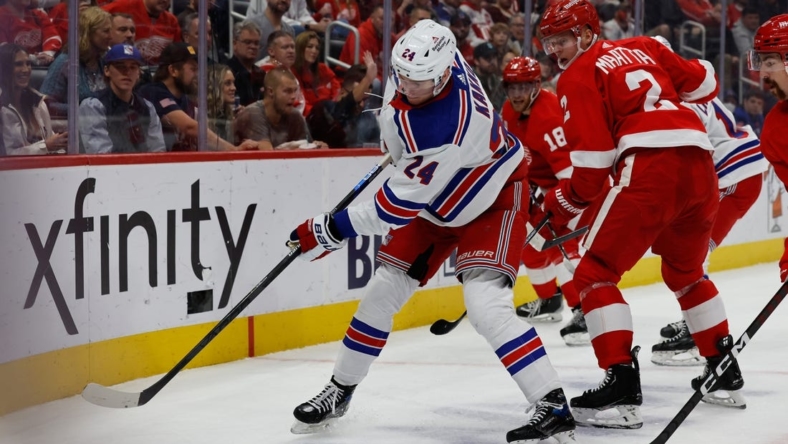 Mika Zibanejad scored two goals to lead the New York Rangers to an 8-2 road win over the Detroit Red Wings on Thursday.

After the game was tied 2-2 going into the third period, the Rangers exploded for four goals in a span of 2:57 and six goals overall in the third to turn the game into a rout.

First, Fox scored on a shot from the top of the right faceoff circle to make it 3-2 New York with 13:58 remaining, and then Goodrow scored with 12:37 left to make it 4-2 Rangers when he got the puck all alone in front of the Detroit goal and backhanded it in.

Zibanejad banged home a rebound 50 seconds after that to make it 5-2 New York, and then the Rangers went up 6-2 with 11:01 left in the game on a goal by Julien Gauthier, who jammed home a loose puck in front of the Detroit goal.

New York then completed the onslaught in the third period with a goal by Libor Hajek with 7:13 remaining and a goal by Jimmy Vesey with 3:29 left.

The Rangers opened the scoring with 4:20 remaining in the first period on a goal by Zibanejad, who one-timed a shot from in between the faceoff circles into a half-open net.

Detroit answered with 1:14 left in the first, tying the game at 1-1 when Joe Veleno fired a wrist shot in between the faceoff circles past New York goalie Igor Shesterkin.