Miguel Sano hit his second career grand slam and the visiting Minnesota Twins gained a split of their doubleheader against the Los Angeles Angels with a 6-3 victory on Thursday.

Jose Berrios (4-2) allowed three runs with seven strikeouts over five innings for the Twins, who were held to four hits in a 7-1 loss in the first game. Hansel Robles closed out the seven-inning game for his second save.

Angels starter Griffin Canning (3-3) retired the first batter he faced before sandwiching a pair of walks around Max Kepler’s double. Sano then cleared the bases with his fifth homer in his last six games.

Jose Rojas belted a leadoff homer in the second for the Angels, who have lost seven of their last 10 games.

Canning was removed after allowing four runs with four walks while throwing 68 pitches over two innings. 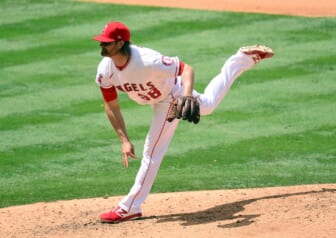 The Angels pulled within a run in the second. Taylor Ward’s double scored Justin Upton, who walked to begin the inning. Juan Lagares then struck out before Ward scored on Drew Butera’s single to center.

Minnesota added to its lead in the third on Mitch Garver’s two-out, solo homer off Hunter Strickland.

Luis Arraez had two hits and Josh Donaldson drew three walks for the Twins, who won for the third time in their last 12 games.

Twins shortstop Jorge Polanco left the game in the sixth inning due to ankle soreness. Designated hitter Nelson Cruz was unavailable due to a left wrist contusion after being hit by a pitch in the first game.

Angels designated hitter Shohei Ohtani, who leads the majors with 14 home runs and was rested in the first half of the doubleheader, went 0-for-3 with three strikeouts in the second game.