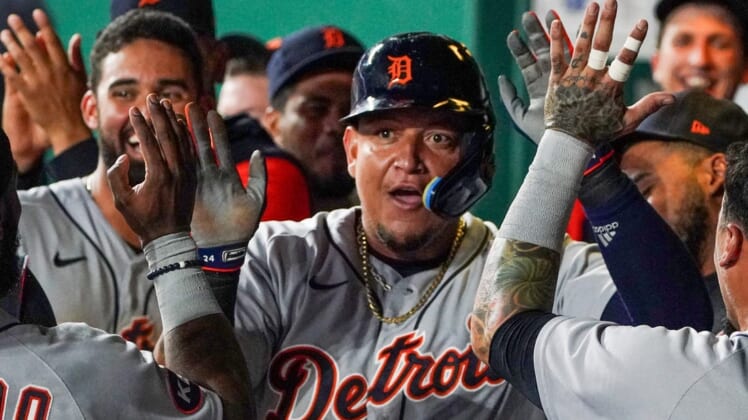 Miguel Cabrera drove in two runs, breaking a tie with Ken Griffey Jr. in RBIs and moving him into a tie with Ted Williams, as the Detroit Tigers defeated the Royals 7-5 Tuesday night in Kansas City.

Cabrera now has 160 career RBIs against the Royals, the most of any opponent in Royals history.

Cabrera also had his first stolen base since 2020 in a four-run seventh inning.

The Royals starting lineup included six rookies, including three who have made their debuts this season. One of them, MJ Melendez, led off the first with a triple to the opposite field. He scored when Andrew Benintendi drove a ground ball past the drawn-in infield.

The Tigers answered with a pair of runs in the top of the second. Jonathan Schoop led off with a single. He went to second on a single by Spencer Torkenson. Akil Baddoo, who made his return to the majors after a two-month stint in the minor leagues, singled, scoring Schoop. Riley Greene grounded into a double play, but Torkelson scored the go-ahead run.

The Tigers tied the score in the fifth on a sacrifice fly by Cabrera, scoring Javier Baez, and breaking the tie with Griffey for 15th place in major league history with 1,837 RBIs. In his next at-bat, Cabrera again drove in Baez, tying him with Williams for 14th place all-time.

Cabrera advanced to second on a wild pitch. He stole third and scored on a wild throw. The Tigers scored four runs in the inning with the benefit of three Royals errors.

Benintendi had an RBI and a run scored in the eighth.