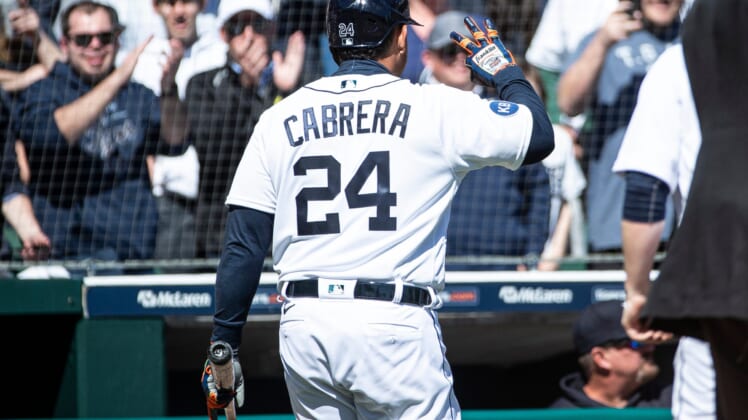 When future Hall of Famer Miguel Cabrera made his MLB debut with the then-Miami Marlins back in 2003, no one could have expected for him to morph into one of the best players of the modern era.

During a five-year run with the Marlins, Miggy earned four All-Star appearances. His career started with the young infielder helping lead the upstart Marlins to a World Series win over the New York Yankes during that 2003 rookie season.

Fast forward nearly 20 years, and Miguel Cabrera once again made history against the very same Yankees. Taking on the Pinstripes in Detroit on Thursday, the 11-time All-Star needed one hit to collect the 3,000th of his career. He did just that with a single into right field on Saturday, sending Detroit’s home crowd into a feeling of elation.

Talk about a surreal scene in a city that hosted then all-time hits leader Ty Cobb from 1905-1926. History made in a city that has defined history since the Tigers’ inception all the way back in 1901.

For Cabrera, this seems to be the final milestone in a career that has now spanned three different decades and was once defined by him being among the most-feared hitters in baseball until age caught up with the Triple Crown winner and two-time MVP. It wasn’t too long ago that the Venezuela native put up one of the greatest 10-year runs since the aforementioned Cobb.

Even with Cabrera having taken a back seat to younger Tigers players over the past few seasons, he remains a fixture in Detroit. Being able to collect that 3,000th hit at home in front of fans who have rooted for him since he came to Detroit back in 2008 had to be extra special. He opened up about he inevitability of hitting that plateau just recently.

“That number is really hard to get. Don’t get me wrong, I always dreamed about this moment. I was always thinking about, in your career where you’re going to be. I’m in a good position right now. I want to enjoy the moment, but at the same time, I want to think the same thing I thought when I first came up — play to win with my teammates. It’s not fair to say, ‘Oh, I get 3,000 because of me.’ No, I get 3,000 because of my teammates, my coaches, my manager, everyone.”

Miguel Cabrera on getting his No. 3,000, via the Detroit Free Press

of the 32 members of the 3,000-hit club before Miguel Cabrera did his thing, only six have not been inducted into Cooperstown.

Of that group, Pete Rose is not eligible after MLB banned him from the game for betting on baseball. Adrian Beltre, Albert Pujols and Ichiro will find themselves inducted here soon. Meanwhile, Alex Rodriguez and Rafael Palmeiro were figureheads during the MLB steroid era and are unlikely to ever be voted in.

The same thing can’t be said about Miggy. Once he did in fact call it quits, the all-time great will find himself in Cooperstown in short order.