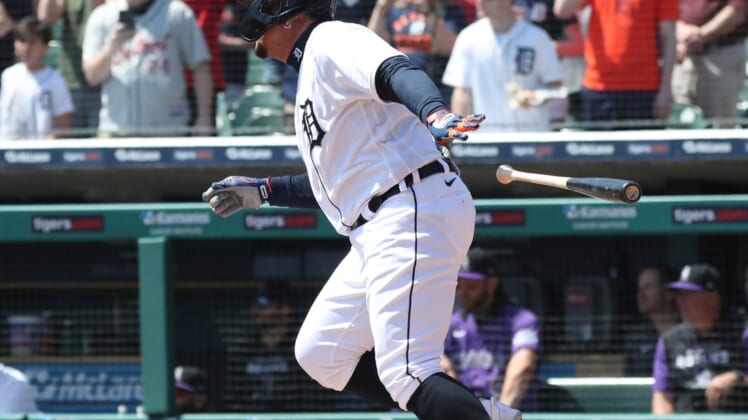 Miguel Cabrera became the 33rd major leaguer to reach 3,000 career hits and drove in two runs as the Detroit Tigers routed the visiting Colorado Rockies 13-0 in the first game of a split doubleheader on Saturday.

Cabrera, 39, grounded a first-inning single to right field off right-hander Antonio Senzatela to join an exclusive club. The two-time AL MVP is the seventh player in major league history with 3,000 hits and 500 home runs.

After receiving a lengthy ovation from the Comerica Park crowd, Cabrera later came around to score on Spencer Torkelson’s two-out, three-run homer to right field.

Harold Castro went 4-for-5 with two runs scored for Detroit, which out-hit the Rockies 20-7 and set season highs in runs and hits. Robbie Grossman tallied three hits and reached base four times.

The Tigers sent nine batters to the plate in the first inning and scored four runs on six hits. Jonathan Schoop singled with two outs to score Austin Meadows from third.

Torkelson followed with a 354-foot blast score off Senzatela (1-1) for his third homer of the season.

The Tigers added a run in the fourth when Castro hit a leadoff single and later scored on Grossman’s single to right field.

Senzatela departed after yielding five runs on 10 hits over five frames. He struck out three with no walks.

Detroit broke the game open with four runs off Ty Blach in the sixth. Akil Baddoo singled in a run before Cabrera came to the plate with the bases loaded and two outs.

After delivering a two-run single to left field, Cabrera was lifted for a pinch runner and received a large cheer from the crowd. Jeimer Candelario followed with a run-scoring single to cap the rally.

Randal Grichuk had two hits for Colorado, which was playing just its third road game of the season.