Miguel Cabrera gets 3 hits as Tigers take down Royals 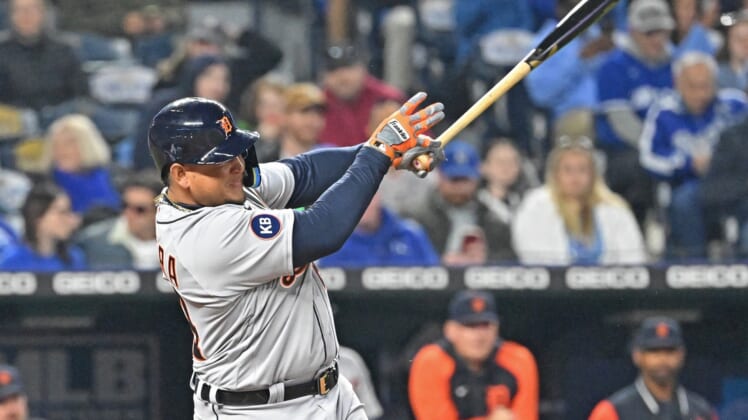 Miguel Cabrera had three hits and scored a run as the Detroit Tigers defeated the Royals 4-2 Thursday night in the first game of a four-game series in Kansas City.

Joe Jimenez (1-0) earned the win for the Tigers. Gregory Soto picked up his second save. Jake Brentz (0-2) took the loss.

The story early for the Royals was missed opportunities. They had a runner on third with one out in each of the first two innings and did not score. They have yet to score a first-inning run in 2022.

Bobby Witt Jr. laced a one-out triple to right; but, after breaking for home on a ground ball by Andrew Benintendi, Witt was caught in a rundown.

The Tigers then loaded the bases with nobody out in the second. Greinke hit Spencer Torkelson with a 1-2 pitch to drive in Detroit’s first run. Cabrera then scored on a sacrifice fly to short left by Harold Castro, who replaced Javier Baez after Baez was scratched from the lineup with right thumb soreness.

Hunter Dozier hit a one-out triple in the fourth, the third time in four innings the Royals had a runner 90 feet away with one out. Adalberto Mondesi walked, and Michael A. Taylor’s infield hit scored Dozier. Mondesi came around to score on Whit Merrifield’s two-out single.

Greinke gave up a leadoff single to Austin Meadows in the sixth. After retiring Jonathan Schoop on a groundout, Greinke left the game.

Cabrera lined a single to right with two outs, but Merrifield threw out Meadows at the plate to end the inning.

The Tigers retook the lead in the seventh. Torkelson drew a one-out walk. With two outs, three straight singles by pinch-hitter Eric Haase, Victor Reyes and Meadows resulted in two runs. Reyes and Meadows got the RBIs.