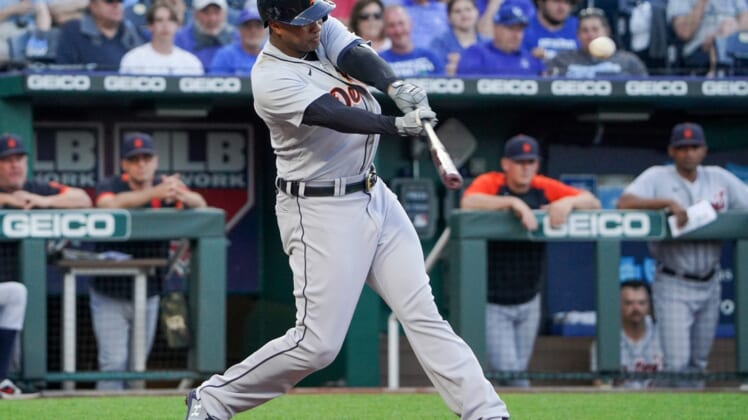 Miguel Cabrera had his second straight multi-hit game — with a double, a run scored and an RBI — as the Detroit Tigers defeated the Royals 4-3 on Tuesday night in Kansas City.

The Royals lost their fifth straight and 10th in their last 11 games. They have not led at any point during the five-game losing streak.

Detroit’s Casey Mize (4-4) had his eighth quality start in his last nine outings. He allowed three runs on seven hits in 6 2/3 innings. He struck out three and walked one.

Gregory Soto pitched the ninth for his sixth save in as many chances.

Mike Minor (5-4) took the loss for the Royals. He allowed four runs on seven hits in 5 2/3 innings. He didn’t walk a batter and struck out five.

Cabrera’s 246 career hits against the Royals are his second most against any opponent (258, Cleveland). His 151 career RBIs are the third most in his career (163 vs. Cleveland, 158 vs. Minnesota).

He drove in the Tigers’ first run, in the first. But Minor induced an inning-ending double play to eliminate further damage.

The Tigers added two more in the third, on Jonathan Schoop’s two-run home run. Schoop hit an 0-2 pitch just over the fence in right.

The Royals got those two runs back in the bottom of the third, with some help from Mize. Nicky Lopez and Whit Merrifield singled with one out, and both runners advanced on a wild pitch. Lopez scored on a groundout by Carlos Santana. With two outs, Mize hit Salvador Perez with a pitch and walked Jorge Soler, loading the bases. Mize’s second wild pitch scored Merrifield.

Cabrera scored the Tigers’ fourth run, in the sixth inning. He stroked a two-out double to the wall in right-center and advanced to third on a sharp single to left by Eric Haase. Daz Cameron’s line drive up the middle off reliever Kyle Zimmer brought in Cabrera.

The Royals drew within one run in the seventh. Jarrod Dyson doubled to right with one out, moved to third on a flyout and scored on Lopez’s bloop single.